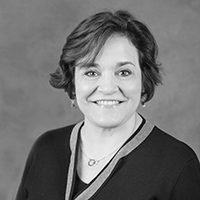 With 30 years of experience leading library and branch operations with Chicago Public Library, Andrea Telli has been a recognized champion of urban libraries. As Commissioner of Chicago Public Library, she oversaw one of the largest big-city library systems in the world, with an annual budget of $130 million, 81 branches, three regional libraries, and the city’s 750,000 sq. ft. central library.

Prior to her retirement in 2020, Andrea was a seasoned, tested, and trusted leader in setting and delivering on system-wide priorities for Chicago Public Library. In 2012, she was named Assistant Commissioner of Neighborhood Services where she established and led strategy for library operations for CPL’s 81 branches and regional libraries. In this role, she also represented CPL as a mentor librarian through the International Network of Emerging Library Leaders (INELI), funded through the Bill and Melinda Gates Foundation. In 2018, she became Deputy Commissioner of Public Services, adding oversight of CPL’s flagship central library, Harold Washington Library Center (HWLC) to her portfolio. In these roles, she also led one of the most significant periods of capital improvement in CPL’s history, with the opening of 12 brand new library branches and major renovations in 18 branches. She prioritized programmatic, organizational and facility improvement initiatives that reflected the diversity of Chicago, and shared pride and purpose with the CPL staff who serve the needs of Chicagoans to help make our communities safer, stronger and more successful.

Prior to her tenure in CPL's executive administration, Andrea was the Central District Chief for CPL, Manager of the Humboldt Park Branch, and an archivist in the Library's Special Collections Department, where she focused on the description and organization of neighborhood history collections. She received her Bachelor of Arts in Spanish from Drake University, a Master’s in Spanish Literature from Georgetown University, and a Master’s in Library Science from the University of Illinois at Urbana-Champaign.

As a lifelong Chicagoan, Andrea continues to contribute to her city and her profession through consulting, advocacy, and active participation in the improvement of libraries and municipal agencies nationally.