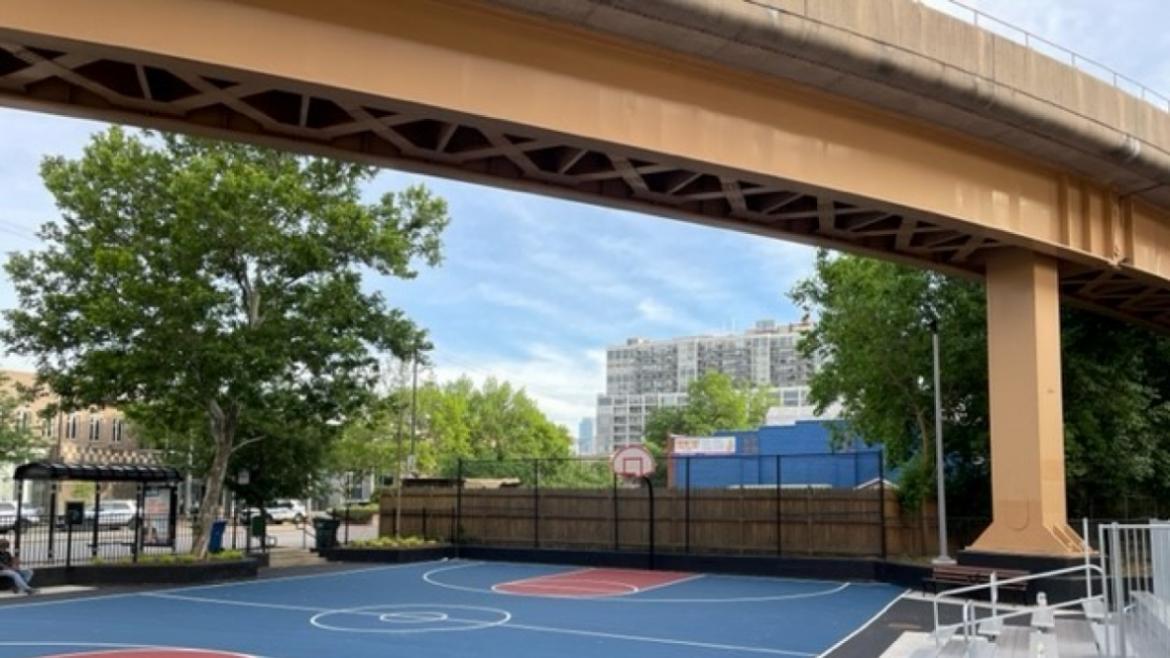 The public park located at 1735 S. State St. features a newly renovated basketball court that will provide additional opportunities for basketball programming for the community in partnership with DePaul University. The makeover is a valuable improvement to the facility and a welcome upgrade for park visitors and aspiring athletes seeking access to better quality public urban spaces to engage in active recreation and play.

"The improvements to Lin Park are more than just structural investments. These enhancements are a commitment to our future generation of players that will seek this destination to interact with their peers, engage in the sport of basketball, and build their self-esteem through active physical play," said Rosa Escareño, Chicago Park District General Superintendent and CEO. "The Chicago Park District is grateful to DePaul University, Alderman Pat Dowell and the South Loop and Chinatown neighborhoods for their unwavering commitment to this project."

In addition to the revamped basketball court, the renovation includes a new half court facility, new bleachers, benches, lighting and a drinking fountain. Updated landscape and ADA accessibility improvements are also part of the overall renovation. Located adjacent to the Orange Line CTA ‘L’ Train, the park will be a destination sports play area for future generations of players and current athletes to gather and play.

"Lin Park has been an indispensable resource in the South Loop neighborhood for many years. This facility has hosted basketball games, community events, and not to mention, the number of times it has been the backdrop for commercials and films,” said Ald. Pat Dowell, 3rd Ward. “It was time for a facelift; and I am happy to join the Chicago Park District, DePaul University and members of the South Loop and Chinatown neighborhood in working together to bring Lin Park into the 21st century.”

DePaul invested in the Lin Park project as part of its upcoming 125th Anniversary celebrations and as a legacy commitment to the South Loop community. The public park is located half a mile from Wintrust Arena, where DePaul Blue Demon men’s and women’s basketball teams play. The university community will be ongoing good stewards of the park and will include cleanup as part of its annual Vincentian Service Day.

“This fall, DePaul will kick off its 125th anniversary celebration, and we are honored to partner with the Chicago Park District to extend our long history of giving back to our community,” said DePaul President A. Gabriel Esteban. “We hope the renovation of Lin Park will benefit Chicagoans for many years to come, as we continue to uphold our Catholic, Vincentian mission to serve the public good. We look forward to seeing this park filled with games and laughter, adults and children – hopefully many future Blue Demons.”

The 0.27-acre park first opened in 1970 and was named in 2004 after Dr. Margaret Hie Ding Lin, a Chinese immigrant and physician in nearby Chinatown neighborhood. Dr. Lin’s memory lives on through the creation of opportunities in the park that exemplify the commitment to servicing and supporting the recreational and health needs of the Chinese community. This facility is part of the collection of the Chicago Park District’s 325 outdoor basketball courts located in over 200 parks throughout Chicago.