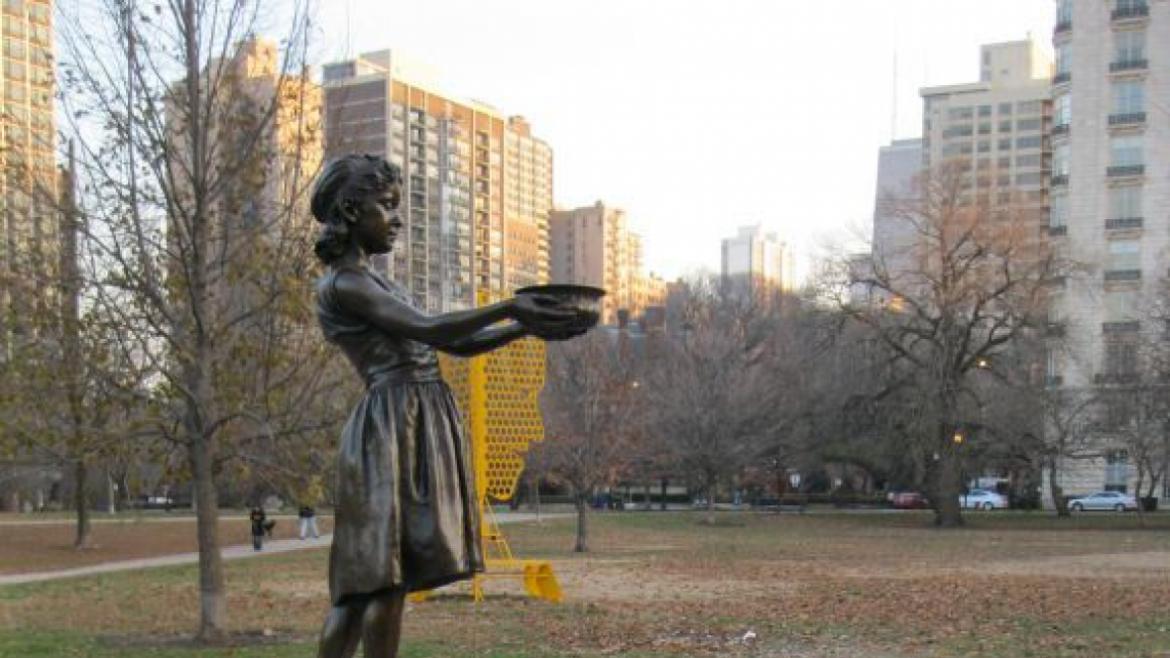 More than 50 years after being stolen, the Chicago Park District and partners celebrated the recent recreation and reinstallation of Fountain Girl, the bronze decorative fountain also called The Little Cold Water Girl on display today in Lincoln Park south of W. LaSalle Drive and east of the Chicago History Museum.  The piece was sculpted by English artist George Wade in 1893 as a commissioned piece by the Woman’s Christian Temperance Union (WCTU) for the World’s Columbian Exposition in Chicago.  The WCTU raised $3,000 for the original public fountain to provide “pure drinking water” as an alternative to liquor.

Wade created a bronze girl with outstretched hands holding a small cup that resembled the Loyal Temperance Union badge from which water trickled into a stone basin below.  The sculpture was first installed near the WCTU booth at the World’s Fair in Jackson Park where it provided refreshment to people, dogs and horses.  Two years later, the sculpture was moved to the Chicago Woman’s Temple at LaSalle and Monroe Streets.  Additionally, three copies of the fountain were installed in London, England; Detroit, Michigan; and Portland, Maine.

Following the demolition of the Chicago Woman’s Temple, the original fountain was moved to Lincoln Park near Lake Shore Drive and North Avenue in 1921.  It remained there until going into storage during the 1930s when the site was altered for the Lake Shore Drive reconstruction project.  It was reinstalled in 1940 in Lincoln Park just south of the W. LaSalle Drive underpass.  In the late 1950s, the bronze figure was stolen and never recovered, but its stone base remained intact over the years.

In 2007, the Chicago Park District, the State of Illinois, the Lincoln Park Conservancy and private donors raised funds towards the project.  The bronze figure was recast from the Portland, Maine fountain, and it is now installed on its original base.