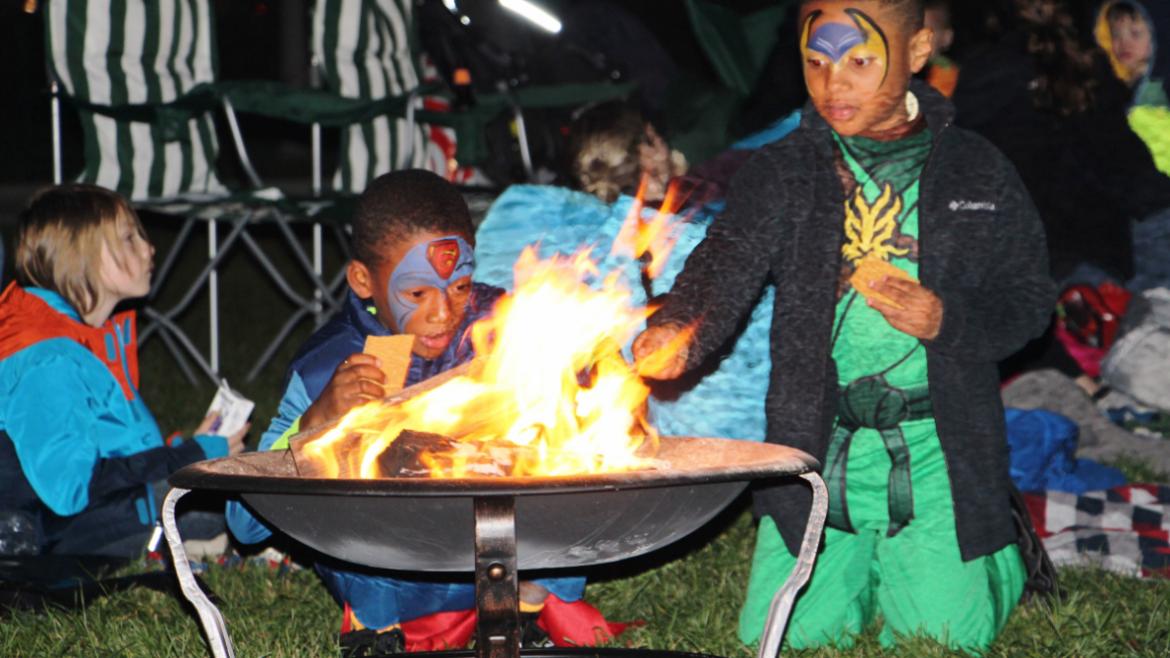 The Chicago Park District announced today the schedule for the 4th annual outdoor horror movie series ‘Campfire Horrors,’ that will return to Northerly Island, located at 1521 S. Linn White Dr., this fall. The film series kicks off on Friday, October 4 at 7 p.m. and will continue every Friday through the month of October.

In the spirit of Halloween, Northerly Island will showcase six scary classics, ranging from tame to terrifying. Each screening will be accompanied by campfires, marshmallow roasting, Mars Wrigley treats, free popcorn and hot beverages.

The film series will kick-off with a family-friendly classic, Hocus Pocus. This popular flick features the antics of three resurrected witches, played by actresses Bette Midler, Sarah Jessica Parker, Kathy Najim, in modern-day Salem, and serves up kid-friendly laughs and scares, and a heaping helping of 90s nostalgia. The double-feature evening will finish with one of horror’s most famous faces, Boris Karloff, in 1931’s Frankenstein.

On Friday, October 11, the series will continue a tradition of featuring film adaptations of horror writer Stephen King’s work with Misery. The hard to forget once seen Misery features menacing and memorable performances from actors Kathy Bates and James Caan.

In week three, the cult-classic zombie comedy Shaun of the Dead will bring some laughs to the series as Londoners do their best to cope with an undead plague they’re not at all prepared for. To finish the evening, I Know What You Did Last Summer will bring some 90s slasher vibes and ratchet up the scares.

To cap the series, another famous horror writer will take the spotlight with the screening of the film adaptation of Ann Rice’s Interview with the Vampire, featuring an all-star cast and some must-see, before-they-were-big performances.

Campfires, with ample firewood, will be set-up throughout the park to create a cozy atmosphere and for roasting marshmallows provided by the Park District along with roasting forks. Hot coffee, tea and cocoa will be available for free to keep visitors warm on chilly nights.

Screenings are outdoors, weather permitting, and audiences are encouraged to bring their own chairs/blankets and layer up for the cooler weather. Campfires will be lit 30 minutes before the start of the film, and burn throughout the night.

Hocus Pocus (PG) at 7 p.m.
A curious youngster moves to Salem, where he struggles to fit in before awakening a trio of diabolical witches that were executed in the 17th century.

Frankenstein (NR) at 8:45 p.m.
In this classic adaptation of the Mary Shelley novel, Henry Frankenstein, a doctor who is trying to discover a way to make the dead walk, succeeds and creates a monster that has to deal with living again.

Misery (R) at 7 p.m.
After a famous author is rescued from a car crash by a fan of his novels, he comes to realize that the care he is receiving is only the beginning of a nightmare of captivity and abuse.

Shaun of the Dead (R) at 7 p.m.
A man’s uneventful life is disrupted by the zombie apocalypse, and he decides to use the opportunity to save his friends as a chance to win back his ex.

I Know What You Did Last Summer (R) at 8:45 p.m.
Four young friends bound by a tragic accident are reunited when they find themselves being stalked by a hook-wielding maniac in their small seaside town.

Interview with the Vampire (R) at 7 p.m.
Chronicling centuries, a nearly 200-year-old vampire recounts the incredible story of his transformation and the unbelievable events of his very long life to a sceptic reporter.

For more information, please visit www.chicagoparkdistrict.com. In the event of inclement weather, screenings will be moved indoors to the Northerly Island Visitors Center.

Movies in the Park’s ‘Campfire Horrors’ film series is presented as part of the Chicago Park District’s Night Out in the Parks, a year-round event series features more than 1,200 citywide cultural and arts activities, including more than 200 movie screenings each year. The Campfire Horrors film series is supported by Mars Wrigley, Xfinity and WTTW.