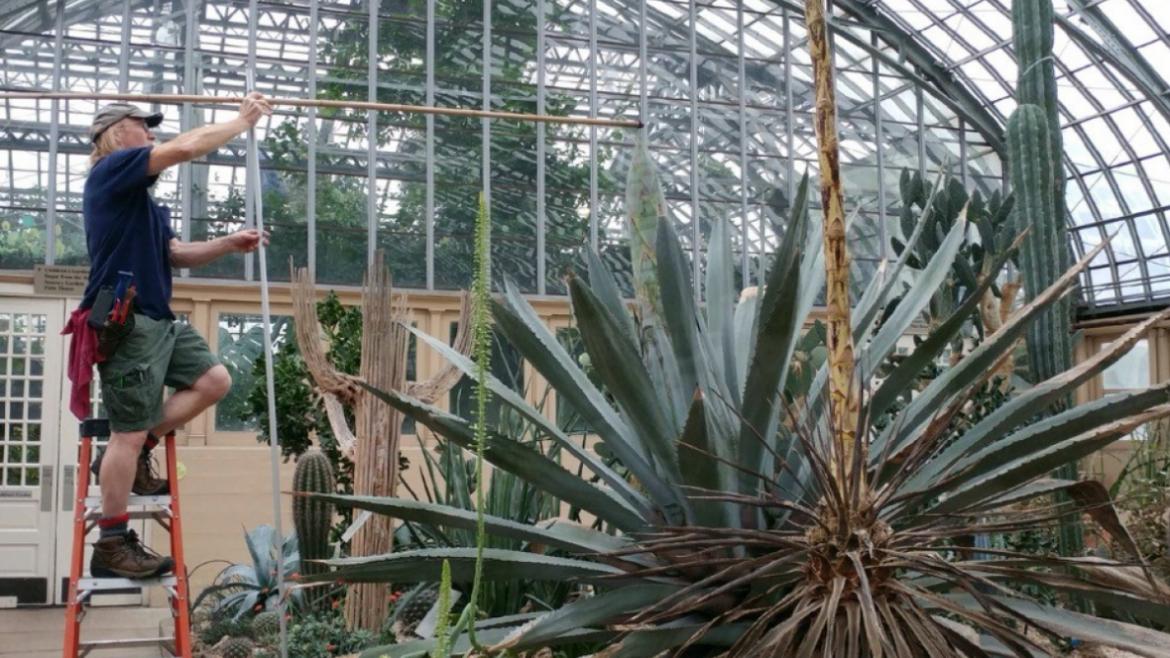 In over a period of three weeks, the agave has grown impressively.Photo: Chicago Park District

The Garfield Park Conservatory, located at 300 N. Central Park Ave., is home to 12 acres of indoor and outdoor gardens and over 2,000 varieties of plants, one of which has been growing insatiably for the last week. The Agave Americana plant, which normally grows 6 feet tall and up to 8 feet wide, is sending up a flower stalk that is nearly 2 feet tall.

In over a period of three weeks, the stalk (or quiote) has grown impressively.  Over the weekend, the stalk grew 11 inches, and Conservatory staff set-up a camera only to record how it flourished an additional 7 inches in just 24 hours. Since then the agave plant has continued to reach upward.

This is not normal for this species, especially outside of its native Mexico and in such a restricted space. Conservatory horticulturalists can only speculate what may have contributed to the plant’s sudden boost in vitality. It is fairly unusual for this species to reach maturity and flower in captivity.

“A few slightly longer, warmer and sunny days, or it also could be entirely the plant’s own 'decision, ' genetic disposition to start growing,” said Garfield Park Conservatory horticulturalist, Ray Jorgensen. “Quite possibly it was a combination of the two elements. Agave Americanas are not picky about their soil and as long as it has good drainage, they can take a bit of frost, but not below freezing temperatures for a prolonged period of time.”

What is more astounding is that the species, native to some of the most hot and arid areas of the world, has been maturing voraciously despite the artic temperatures gripping Chicago. The agave plant’s sudden burst of energy occurred as mounds of snow piled up and ice crystals formed on the window panes of the greenhouse last week. In their natural habitat, this plant species normally flowers from summer into late fall. It is even more surprising to witness this sudden growth spurt a week after Chicago’s recent bout with subzero temperatures and subsequent bone chilling rain and ice.

There are over 100 different agave species and varieties. The oversized succulent on display at the West Side greenhouse is of the Agave Americana kind and is the first agave to be discovered and named in May 1, 1753.

The plant came to Chicago and has been growing in the Conservatory’s Desert House for over 50 years. In the wild, these plants reach maturity in approximately 15 to 25 years. This is just one of 25 agave species that the Conservatory maintains as part of its vast collection of exotic plants that thrive in its Desert House. This plant usually flowers once and then slowly dies because the amount of energy necessary to produce its inflorescence depletes all of its energy.

The long leave succulent plant produces a flower spire with panicles (branches) topped with flowers that extend outward and contain a sap that is fermented into a drink called pulque. This substance is then distilled to make the spirit mezcal. Mezcal is not the only liquor produced from this plant; tequila is made exclusively from blue agave, one of the many varieties of this plant.