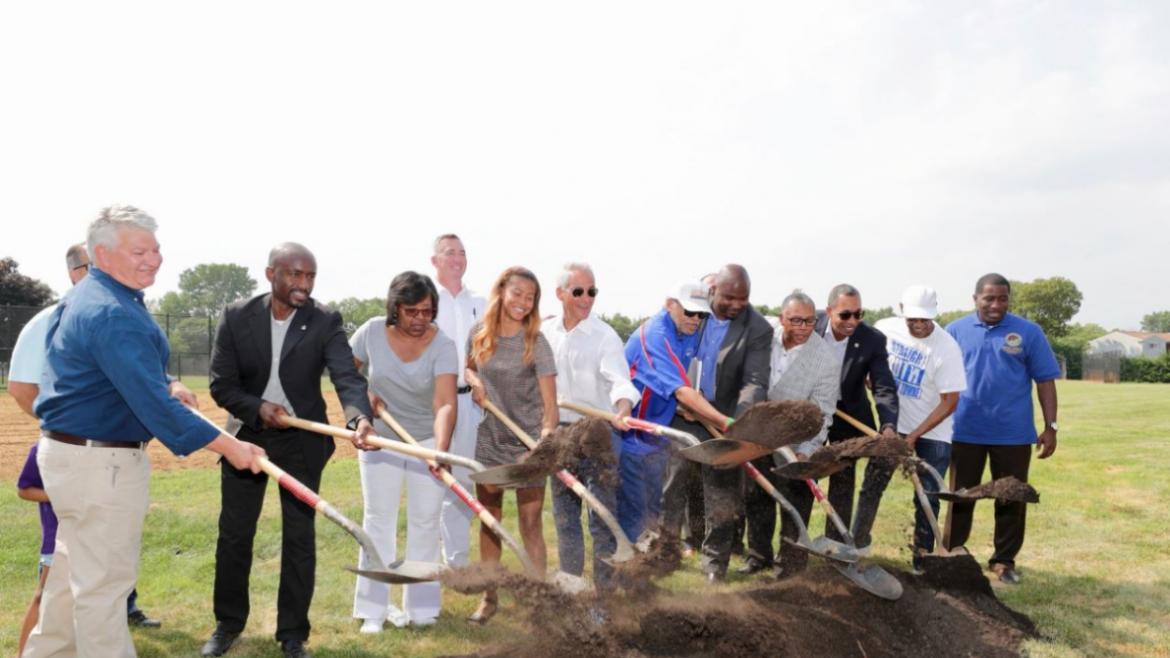 Mayor Rahm Emanuel and Chicago Park District General Superintendent Michael Kelly today joined After School Matters, Exelon Corporation, local and state officials and community members to break ground on the Gately Indoor Track & Field. The indoor track facility at Gately Park, located at 744 E 103rd Street, will be the first public indoor facility dedicated to track and field. It will be constructed by McHugh Construction and Bowa Construction, which has headquarters on the south side.

“The Gately Indoor Track & Field will provide Chicago athletes of all ages with the ability to train year round, and more importantly with the opportunity to stay engaged and on track to succeed,” said Mayor Emanuel. “In partnership with After School Matters and Exelon, we are proud to make Harold Washington’s dream a reality on the south side.”

The 139,000 square foot facility will feature the area’s first hydraulically banked 200-meter track, and an 8-lane track with full track and field event capabilities including long jump, high jump, a dedicated throwing cage, eight sprint lanes and a warm up area. There will be seating capacity of 3,500 with supporting amenities such as a meet management control room, concessions, multipurpose rooms and locker rooms.

“We are excited to break ground on this incredible new community anchor,” said Chicago Park District General Superintendent & CEO Michael Kelly. “Upon completion, this state-of-the-art facility will provide unprecedented recreational and competitive opportunities in Roseland, Pullman and neighboring communities. In addition to cultivating young athletes and supporting local programming, this indoor track and field will have the capacity to attract regional events, bringing economic benefits to the area. I appreciate the work of our partners, who stood shoulder to shoulder to bring this vision to life.”

The facility will house one of the first neighborhood based After School Matters locations, supporting a unique partnership to provide mentoring and out-of-school time opportunities to young people from neighboring communities and throughout the city. After School Matters currently delivers more than 1,400 after-school and summer programs that serve more than 18,000 teens each year in schools, parks, libraries and community organizations across 72 of Chicago’s 77 community areas.

“Chicago’s young people need and deserve the best opportunities to help them explore their passions and find their futures,” said Mary Ellen Caron, Chief Executive Officer of After School Matters. “Thanks to the leadership of our entire community of supporters and partners – especially the Chicago Park District, the Mayor’s Office, and our Board Chair Mellody Hobson – After School Matters will now have a dedicated space on the South Side of Chicago intentionally designed for teenagers to learn, grow, and discover their potential in a safe and supportive environment.”

The facility will be funded by the City of Chicago, the Chicago Park District, and with generous donations both from Mellody Hobson and the George Lucas Family Foundation on behalf of After School Matters, and the Exelon Corporation.

“At Exelon, we invest in local initiatives that empower our customers and communities,” said William A. Von Hoene, Jr., senior executive vice president and chief strategy officer of Exelon Corporation. “Our support for this new facility will provide more than just a safe place for kids to go after school – it will teach important life lessons on teamwork, self-motivation and friendly competition.”

Construction for the project will be a joint venture between McHugh Construction and Bowa Construction. This team is also constructing the relocation of the G and L concourses at O’Hare for American Airlines. McHugh recently completed the Blackhawks Practice Facility, and Bow Construction built the Ohio State University’s Recreation and Physical Activity Center. Bowa Construction is headquartered on Chicago’s south side, and CEO Nosa Ehimwenman was an All- American Track and Field athlete for Ohio State.

“The indoor track at Gately Park will serve as a hub not only for Pullman, but for the entire south side community,” said Alderman Michelle Harris, 8th Ward. “It will give students a safe and engaging place to train, and residents a place where the community will continue to grow for years to come.”

Gately Indoor Track & Field will support recreational and economic opportunities in Chicago’s Pullman and Roseland communities as well as surrounding neighborhoods. The state-of-the-art facility will operate year round as a high quality training and competition center. In addition to track, sports offered will include: volleyball; football; field activities; baseball; basketball; outdoor soccer; and lacrosse. In addition to sporting events and programs, non-sport events are also expected to be held throughout the year. Chicago Public School athletes will also have direct access to the facility.

Recreational facilities are a key component of Building on Burnham, the Mayor's comprehensive plan to invest in the Lakefront, the Chicago River, natural areas and recreational opportunities in neighborhoods across the city. Since 2011, student recreational facilities have been announced and built at XS Tennis, Clark Park, Pullman Community Center, Exelon Student Recreation Center and Read Dunning Center. Under the Building on Burnham plan, 985 acres of parks have been acquired and 5.5 miles of waterfront access have been developed since 2011, with continued plans to acquire additional parkland and further develop the waterfront in the coming years.

Gately Park boasts a rich history of providing and supporting vital recreation and school based athletic programs. Dedicated in 1953, Gately Park is named in honor of James  A. Gately, longtime businessman in the nearby Roseland community, and then President of the Chicago Park District Board of Commissioners. Constructed in 1947 on Pullman Car Company land, the park was designed to serve the community’s growing population during and after World War II.  Park improvements began in 1950 and included a grandstand, locker rooms, and an office building. High school football teams from both the Chicago Public Schools and the Catholic League quickly put the new facilities to use.  Generations later, Gately Park continues to serve as a vital resource to the surrounding community and continues to host high school football games and other athletic competitions.