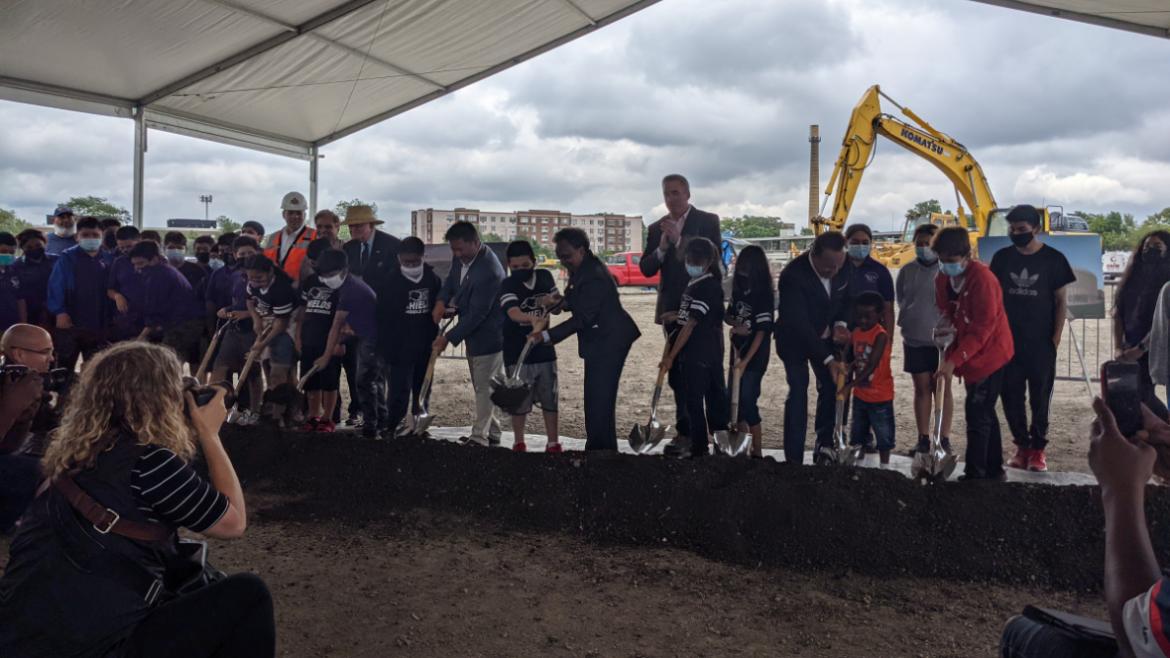 CHICAGO —Today, Mayor Lightfoot joined elected leaders, Chicago Park District General Superintendent Michael Kelly, and Don Villar, Secretary-Treasurer from the Chicago Federation of Labor to break ground on the new Chicago Park District Campus in the Brighton Park neighborhood. The District’s move from its current Streeterville location to 4800 S. Western in Brighton Park, will bring much-needed investment to the city’s Southwest side, including added parkland to one of the city’s top park-deprived communities as well as stimulating the local economy by creating jobs and increasing spending with neighboring businesses.

"With our historic post-COVID recovery around the corner, we simply cannot afford to pass up on opportunities to invest in our South, Southwest, and West Sides, which have borne the brunt of this pandemic," said Mayor Lightfoot. "The creation of this new Park District headquarters and series of park amenities will bring good-paying sustainable jobs and resources to Brighton Park residents, as well as reinvigorate the local economy by supporting nearby INVEST South/West projects. I commend the Park District for choosing to invest in Brighton Park and further amplifying the transformative impacts of our ongoing neighborhood investments."

“The development of the Brighton Park site for the Chicago Park District headquarters is a win-win situation for the District and the community,” said Chicago Park District General Superintendent & CEO Michael Kelly. “In addition to the efficiencies of owning our headquarters, we are bringing much-needed parkland, recreational amenities, and economic revitalization to the Brighton Park community.”

Approximately 350 construction jobs will be created, including carpenters, masonry workers, and painters. In addition, roughly 180 Chicago Park District employees will relocate to the campus bringing money to the community by patronizing local eateries and other businesses.

This project creates a unique opportunity for the Chicago Park District to own, rather than lease, administrative office while addressing the deficit of open space per capita in Brighton Park. Brighton Park has an open space need of 66.68 acres, placing it in the top five, park-deficient communities in Chicago.

In the search for a new administrative headquarters, the Park District explored several locations across the city. The site at 48th and Western was selected due to the City’s prioritization for neighborhood investment, the need for additional open space acreage in the community, the site’s direct access to public transportation, and the large size and neighborhood context of the available property. The Park District acquired the site in 2018, began environmental remediation of the site and design work in 2019. The project was issued for bid in the summer of 2020.

Upon completion of the new campus in Brighton Park, the Chicago Park District will move from the Time-Life Building in Streeterville, the space it has occupied since 2001. Previously, the District relocated to Streeterville from its headquarters on McFetridge Drive to make way for the Soldier Field renovation.

Learn more about our next virtual community meeting, which is scheduled for August 4 from 6 to 9 pm, at www.chicagoparkdistrict.com/events/community-meeting-park-no-596-project-update-online.