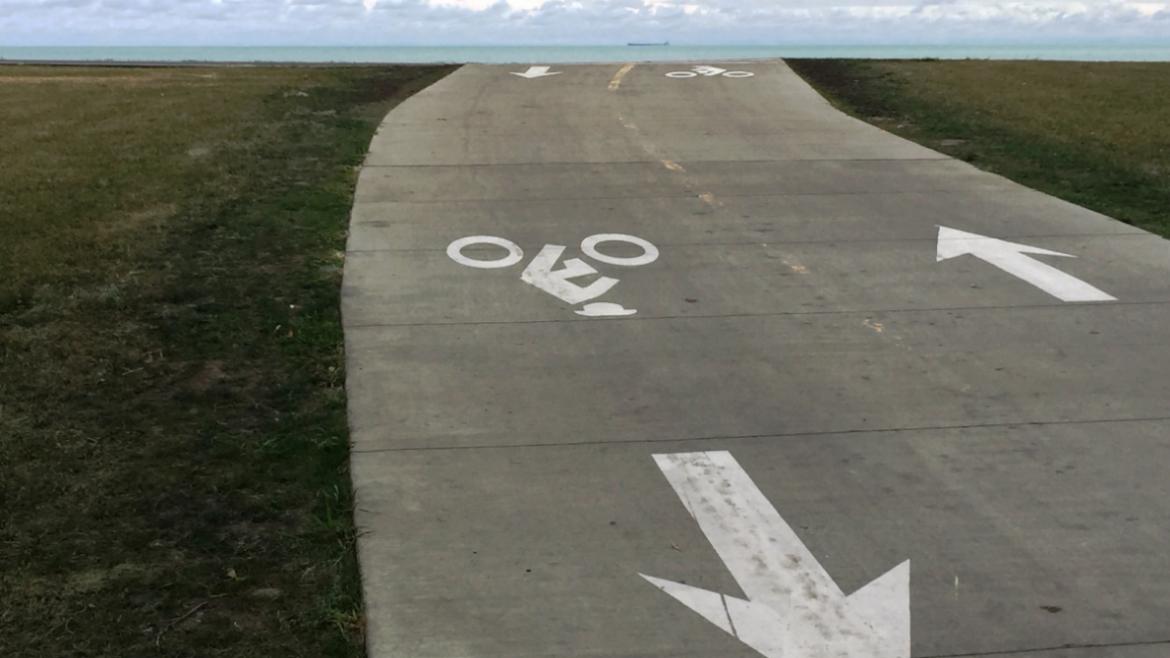 CHICAGO – Mayor Lori E. Lightfoot today joined General Superintendent and CEO of the Chicago Park District, Mike Kelly, to announce a $4.75 million donation from Ken Griffin, philanthropist and Founder and Chief Executive Officer of Citadel. The gift is funding the repair work underway on the lakefront trail, one of Chicago’s most iconic landmarks, which sustained damage over the winter as a result of rising lake levels and severe storms. The contribution, which was initiated in April, enabled work to repave damaged sections of the pedestrian and bike paths while the trail was closed this spring. The funds will also facilitate intermediate fortification measures to protect from future storms and will stabilize and strengthen key sections of the shoreline along the lakefront trail, particularly on the south side.

“I want to thank Ken Griffin for stepping up again and identifying an opportunity to start this critical work during the trail’s closure in order to restore one of our city’s most valuable resources,” said Mayor Lightfoot. “I look forward to witnessing the true and lasting effort this donation will allow us to make in preserving a pivotal piece of our great city for all our residents and visitors to enjoy.”

Today’s announcement follows a $12 million gift from Griffin in 2016 to fund the completion of the lakefront trail project, which provided separate paths for cyclists and pedestrians along the 18-mile pathway – from the Edgewater community to the South Shore community – making recreational activities safer for the thousands of people who visit the lakefront each year.

“Chicago’s lakefront is one of the city’s most beloved and iconic features,” said Griffin. “I am proud to make this investment in the restoration and preservation of the lakefront trail, knowing that we all look forward to enjoying the lakefront this summer.

The City announced it will reopen its iconic lakefront trail on Monday, June 22 after it was closed to mitigate the further spread of the COVID-19 virus. Earlier this year, Mayor Lori E. Lightfoot joined Governor J.B. Pritzker and Senator Dick Durbin to issue a local disaster proclamation due to major damage caused by flooding, strong winds and destructive waves that hit the lakefront.

“Earlier this week, we announced the reopening of one of our city’s treasured amenities, and today, because of the generosity of a great Chicagoan, Ken Griffin, we are able to work toward protecting the lakefront trail for future generations,” said Chicago Park District General Superintendent and CEO Michael Kelly. “The Park District has been hard at work with our partners to complete the work on the trail, while ensuring safe and ready access from south to north.”

This work will build upon the City’s multi-departmental effort to preserve and protect the lakefront. Most recently the Chicago Department of Transportation (CDOT), Chicago Park District and U.S. Army Corps of Engineers started a lakefront stabilization project to protect Lake Shore Drive at 49th Street. The project led by the Army Corps will install more than 2,000 tons of rip rap and concrete blocks along the shoreline from 49th to 50th Streets. The area, known as Morgan Shoal, has suffered severe erosion as a result of major storms over the fall and winter at a time when the water level in Lake Michigan is at a historically high level. The project will also rebuild a portion of the Lakefront Trail in this area, which is expected to take about three months to complete.

The initial $1 million in funding for the project is being supplemented by an additional $1.5 million grant from the Metropolitan Water Reclamation District, and the additional funding will be used for additional heavy stone along the lakefront and also for repairs to the lakefront trail behind the revetment and landscaping of the area. During the winter months, CDOT, the Chicago Park District and the Army Corps completed similar protection projects for smaller sections of the lakefront over the winter at Juneway Beach, Rogers Beach and Howard Beach on the far North Side from erosion. These measures are part of the City's comprehensive winter flood protection plan, and they follow the installation of 5,000 feet of concrete barriers at locations prone to flooding along Lake Shore Drive, Oak Street, North Avenue, Fullerton Avenue, Juneway Beach, Rogers Beach, Howard Beach, Granville Street, 49th, 50th and 75th  Streets. These measures were made in conjunction with the Department of Water Management's efforts to clear catch-basins along the lakefront to help stop waves from flooding streets like Lake Shore Drive.

The plan for lakefront trail usage, which allows trail use for commuting and exercise including walking, running and cycling from 6:00 a.m. to 7:00 p.m. daily, requires users to stay in constant motion. Compliance is critical in order to mitigate congregating and achieve social distancing along the popular trail. To encourage proper use, the Chicago Park District will install visible signage along the trail to educate and remind trail users of rules. In addition, Social Distancing Ambassadors (SDA) will be stationed along the trail to educate the public and manage the flow of traffic. Ambassadors will actively engage park patrons providing guidance on appropriate social distancing, the importance of face coverings as well as other health and safety guidelines.

To effectively monitor and control use, the District will minimize access to the trail by restricting select entrance points including select bridges, underpasses and streets along the trail by fifty percent. Park Security will work in tandem with the Chicago Police Department and Office of Emergency Management and Communication to keep the trail safe under guidance from public health officials.

The District strongly urges patrons to take precautions to protect their health and the safety of others while in our parks. Face coverings are required at all times. The District also urges patrons to wash their hands or use hand sanitizer frequently, avoid touching their face with unwashed hands and covering their noses and mouths when sneezing or coughing. Also, anyone who is feeling unwell should stay home, per Chicago Department Public Health order.

Mayor Lightfoot also today announced that in coordination with the lakefront reopening, the City will also reopen another popular public space – The 606 Bloomingdale Trail. The 606 will reopen under the same guidance as the lakefront trail. Chicago Harbors also will open on June 22 for the 2020 boating season. South Shore and Sydney R. Marovitz golf courses also will open to the public on June 22. The Park District’s inland golf facilities and the Diversey Driving Range reopened to the public on June 8.  All golfers will need to follow specific guidelines as mandated by city and state guidelines.