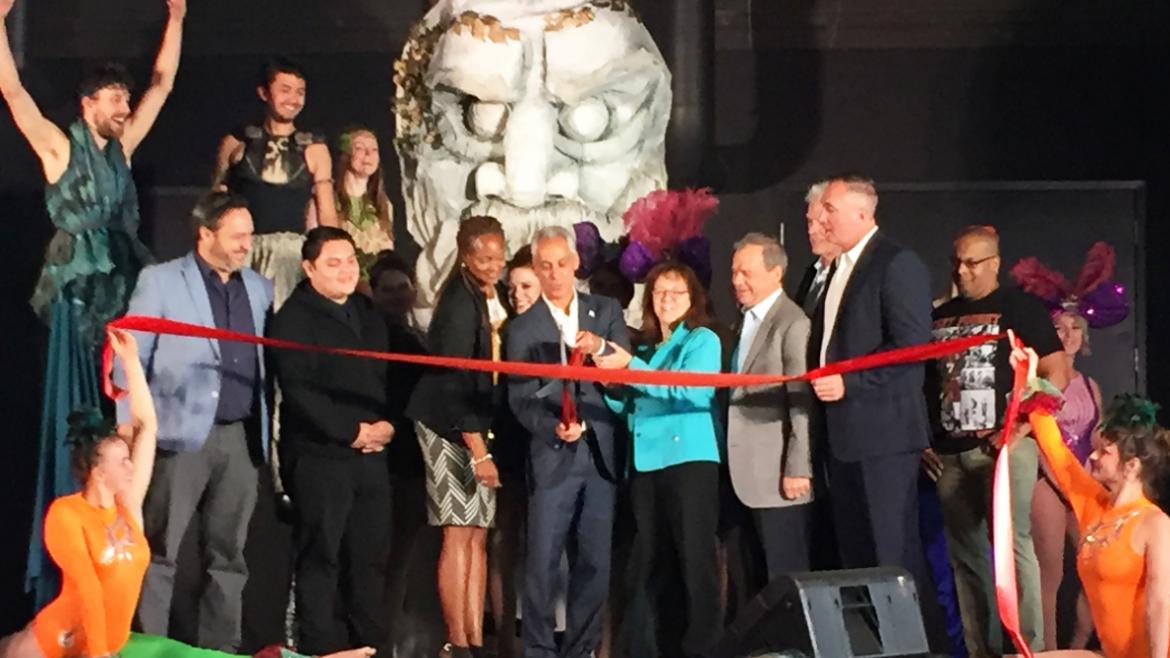 Scheduled performances will take place on January 24, February 3, 9 and 26

Today, the Chicago Park District announced the first ever series of events and dates for arts and cultural programming in the winter at the newly renovated Theater on the Lake (TOTL) event space, located at 2401 N. Lake Shore Drive.

“I am thrilled that recently transformed Theater on the Lake, a historic gem that has brought theater to the community for six decades, is launching its first season of winter programming, " said Mayor Emanuel. “This incredibly unique venue is now year-round, and welcomes residents and visitors to enjoy Chicago’s world-class culture, entertainment and art scene at a fraction of the cost.”

Theater on the Lake will host a variety of events, all part of Mayor Emanuel’s Night Out in the Parks series, starting at the end of January and continuing through February. Programs include a comedic variety show, jazz performances and a staged reading of a new play in development by the acclaimed Chicago playwright and dramaturg, Sandra Delgado. ENCOUNTER: A mixed medium explorative series, one of the programs taking place at TOTL, brings together artists of various mediums to explore the racial realities of Chicago. ENCOUNTER is put on by Chicago’s premiere performance companies Collaboraction, which was featured on Mayor Emanuel’s podcast, Chicago Stories.

“We’re very happy to be returning to the newly renovated Theater on the Lake with even more Night Out in the Park events,” said General Superintendent and CEO Michael Kelly. “The new renovations allow us to offer programming at this historic facility year round, which we are very excited about.”

TOTL was redesigned as a versatile, multi-use venue for performances and special events. Renovations to the performance space included a new permanent stage with professional lighting and sound systems, an enclosed lobby and box office and dressing rooms. The venue now also includes private event space, a restaurant with a state-of-the-art commercial kitchen and a full bar, outdoor seating and indoor restrooms. The south end of the lakefront terrace will accommodate al fresco dining and additional private event rentals.

Below is a description of the winter programs scheduled to take place at Theater on the Lake:

Currently in a long running residency at Chicago’s Hideout, real life couple Lily Emerson (Adventure Sandwich, Opera-matic) and Charlie Malave (Mucca Pazza, Theater Oobleck) are Mr. and Mrs. Wednesday Night, a throw-back to the classic comedy duo in days gone by.  Featuring a live band and an eclectic array of guests from Chicago’s theater, comedy, circus and avant-garde performance community, the show is unpredictable, irreverent and funny. Tickets will be available at www.chicagoparkdistrict.com.

ENCOUNTER is a mixed medium explorative series exploring racism and racial healing in Chicago. This performance will bring together artists of various mediums and lengths, from around Chicago, to explore the reality of racism in Chicago today and envision racial healing. The Encounter series consists of mixed medium pieces of 5 - 20 minutes (History, Identity and Resistance), one full length solo show with post show discussions, and racial healing programming focused around one of four themes (Our Chicago, Saints and Sinners, Untitled Asian storytelling, and Day of Forgiveness).

Fee to public: Free or donation based

A 21 year partnership between The Jazz Institute of Chicago and the Chicago Park District, Jazz City presents the best of Chicago’s jazz community sharing glimpses into the history of Jazz.  Always eclectic, thoughtful and drenched in talent, Jazz City’s programming is a gateway to understanding the important cultural legacy of jazz music. This season is dedicated legendary tenor saxophonist Von Freeman's 95th birthday.

All the Young Horses/NextGen Summit: Von Freeman helped raise two generations of players whom he often called up to the stage as his “young horses”. Led by educator and saxophonist Jarrard Harris, these two handpicked quintets are comprised of some of Chicago’s newest rising stars.

TOTL: In the Works

TOTL:  In the Works will be the third staged reading in the inaugural Theater on the Lake: In the Works series, highlighting a new play in development by a Chicago playwright. This two year partnership nurtures a work in progress through four staged readings and a developmental production programmed as part of the second season of the partnership.  Our inaugural playwright, Sandra Delgado, will be presenting her play in progress, Felons and Familias. The reading will include a talkback session for community feedback.

The Theater on the Lake: Summer Festival will return to its home on the lakefront for its 66th season. Playwright Isaac Gomez will continue in his second year as curator and director for the 2018 season, which is scheduled to run from June 19 through August 31.

For more information regarding Night Out in the Parks events or Theater on the Lake, please visit chicagoparkdistrict.com.

Chicago Park District’s Night Out in the Parks

In 2013, the Chicago Park District (CPD), with support from Mayor Rahm Emanuel, the City of Chicago and the Department of Cultural Affairs and Special Events (DCASE), launched a summer series of over 750 cultural events and programs in over 230 parks citywide entitled Night Out in the Parks (NOITP). Over the past four years, NOITP expanded to over 1,000 cultural events across Chicago year-round. Projects have varied from traditional performances and concerts, to peace rallies, community workshops, nature-based programs, dance performances, festivals, visual arts, and more.

The Chicago Park District is the 2014 Gold Medal Award winner, recognized for excellence in park and recreation management across the nation. For more information about the Chicago Park District’s more than 8,800 acres of parkland, more than 600 parks, 26 miles of lakefront, 12 museums, two world-class conservatories, 16 historic lagoons, nearly 50 nature areas, thousands of special events, sports and entertaining programs, please visit www.chicagoparkdistrict.com or contact the Chicago Park District at 312/742.PLAY or 312/747.2001 (TTY). Want to share your talent? Volunteer in the parks by calling, 312/742.PLAY.