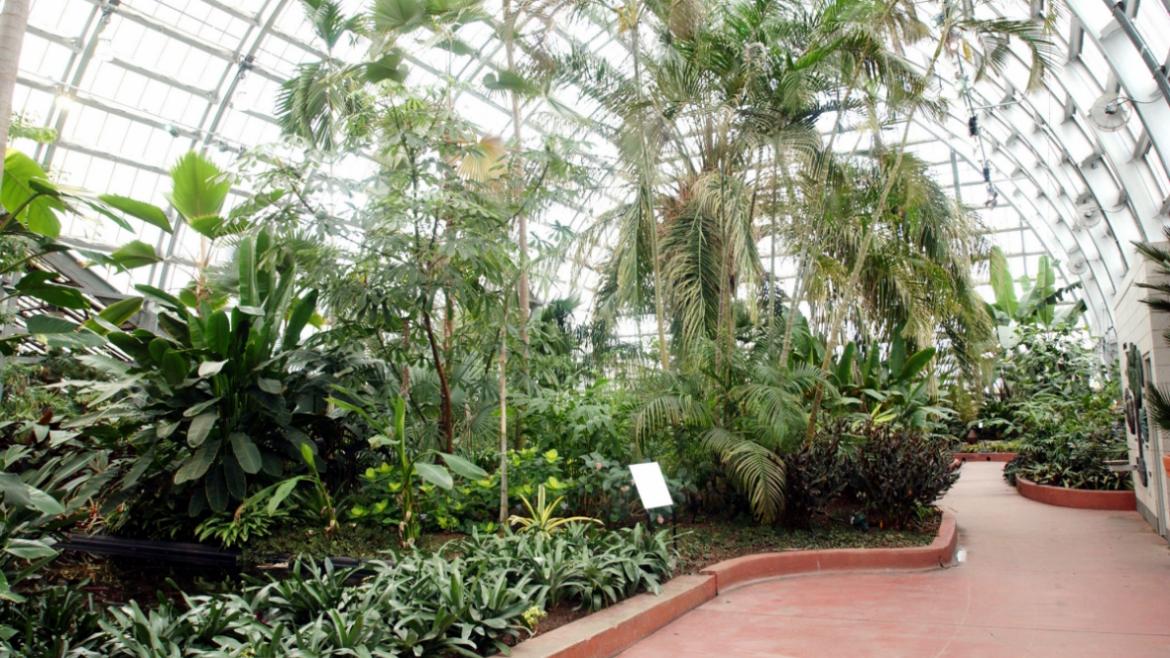 A staple of the Garfield Park Conservatory since 1926, the Scheelea Palm tree has outgrown its home and will be removed, along with two other palm trees, to allow for more sunlight to filter down to other plants, and to create new opportunities for growth.

While the visionaries of the Conservatory may not have dreamed of a day where the palm trees would outgrow the highest roof in the building, unfortunately that day has arrived. The Conservatory provides the ideal home for a vast collection of plants to flourish and thrive. In this controlled environment, these palms have reached the 65 foot ceiling and exceeded the height typical for its species.

Starting on Monday, March 4, greenhouse staff will take down the Scheelea, Cabbage and Carnauba Wax Palms to avoid the plants’ fronds (leaves) potentially breaking through the building’s glass and damaging the dome and historic structure.

“We are saddened by the loss of the palm trees that have been cared for and maintained by Conservatory staff for almost a century.  It was a very difficult decision for us, but one that we have to take to ensure the health of the rest of the plants and the safety and integrity of the structure,” said Mary Eysenbach Chicago Park District’s Director of Conservatories.

However, the aging palms will live on at the Conservatory in other capacities. They will be repurposed as much as possible. After the trees are removed, pieces of the palm trunks, fronds, or fruits will be evaluated for creative use in programming areas and in garden displays at the Garfield Park Conservatory.

Removal of these palms will also provide more space for other plants to thrive. During the Scheelea Palm’s lifetime, it produced many seeds, one of which has grown into a young Scheelea, now approximately 30 years old. The younger palm will have more access to light now that it is no longer living in the shadow of its relative. It is expected to continue to grow in the space for many years, and to take the place of its parent tree. Less shade and more sunlight in the Palm House will also allow for more plants to grow here.

The Scheelea Palm came to Garfield Park Conservatory in 1926 as a seed collected on a field expedition carried out by The Field Museum. The Scheelea Palm has already exceeded the height typical for its species and could grow to a total height of 70+ feet. This palm originates from Bolivia, Brazil, Colombia and Peru.

Just north of the Scheelea Palm, the Cabbage Palm is also reaching the glass.  Here, the crown of the tree is hitting the glazing, which could cause damage to both the glass and the building’s historic frame.  The Garfield Park Conservatory is a historic structure, and the domed roof of the Palm House is a notable design of landscape architect, Jens Jensen.

On the opposite end of the Palm House, the crown of the Carnauba Wax Palm is also reaching the glass ceiling, and will be removed.

Due to the maturity of the palms, relocation is not an option since mature palms do not transplant well, and will not survive outside in the Chicago climate.

The palms will be removed in pieces. A portion of the Palm House will be inaccessible to the public during removal process. For more information about the Garfield Park Conservatory, please visit https://garfieldconservatory.org.

The Garfield Park Conservatory Alliance changes lives through the power of nature. GPCA inspires, educates and provokes exploration through innovative programs and experiences in one of the nation’s largest and finest historic conservatories. GPCA is a non-profit organization that works closely with the Chicago Park District to provide educational programming, events and resources to Conservatory visitors year round.   Programs range from bees, compost, and plant propagation to dynamic arts and culture programs that serve Chicago and beyond.  The Garfield Park Conservatory now hosts over 230,000 visitors annually, engages over 56,000 of them with free public programming and provides school field trips for over 17,000 Chicago children.   The Garfield Park Conservatory is owned and managed by the Chicago Park District and has showcased "landscape art under glass" for over 100 years. Visit us at garfielconservatory.org to learn more and become a member!  Follow us on social media @gpconservatory.

The Garfield Park Conservatory is owned and managed by the Chicago Park District and has showcased "landscape art under glass" for over 100 years. Opened in 1908, the historic Garfield Park Conservatory (300 N. Central Park Ave.) showcases 2,000 varieties of plants ranging from Midwest natives to exotic species, as well as fountains, ponds and a prairie-style waterfall, inside stunning glass houses designed to replicate desert, tropical and prehistoric rainforest environments. The Conservatory's 14-acre campus also boasts three outdoor gardens, an expansive rolling lawn and a stone terrace.