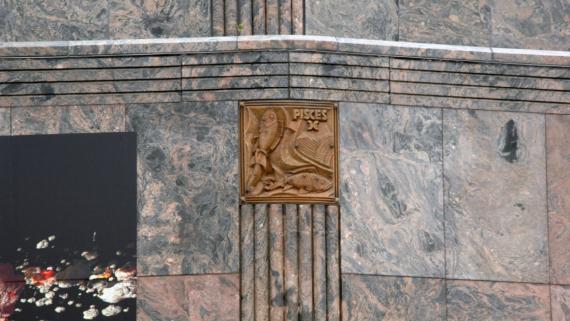 Located on the exterior and interior of Adler Planetarium

The first modern planetarium in the Western Hemisphere, Chicago’s Adler Planetarium opened in 1930. Max Adler (1866 – 1952), retired vice-president of Sears, Roebuck & Co., had visited early astronomical museums in Germany and offered the gift of a planetarium to the city of Chicago. His brother-in-law, Julius Rosenwald , had recently donated funds to establish the Museum of Science and Industry.

In 1928 Adler selected Chicago architect Ernest A. Grunsfeld Jr. to design the Art Deco style building. The following year, Grunsfeld asked Chicago sculptor Alfonso Iannelli to submit proposals for bronze plaques depicting the signs of the zodiac to adorn the twelve-sided polygonal building. Born in Italy, Alfonso Iannelli (1888- 1965) began his earliest training as a sculptor during his childhood. After immigrating to the United States, he studied at the Art Students League of New York and also trained under renowned sculptor Gutzon Borglum. Iannelli produced exquisite sculptures for Frank Lloyd Wright’s Midway Gardens in 1914. Iannelli went on to work for other prominent Chicago architects, prior to receiving the commission for the sculptural adornments for the planetarium.

Iannelli’s square-shaped panels serve as the capitals that top the building’s stream-lined corner pilasters. Each of the twelve panels contains a sculptural bas-relief with a stylized depiction of each zodiac sign, as well as its name in block letters, and symbol in traditional Greek iconography. The panels were cast by Chicago’s American Bronze Company and surfaced in 22-karat gold. Iannelli received a second commission to create an interior dedicatory plaque for placement in the building’s original entrance foyer. Text composed of nickel inlaid lettering arranged as a sun-like circle on the marble wall is surrounded by eight sculptural relief plaques also made of nickel silver. Each of the eight plaques depicts a mythological character representing each of the eight planets. (Pluto had not yet been discovered when Iannelli sculpted the interior installation.) Three years after the completion, the planetarium became an iconic site within Chicago’s second world’s fair, A Century of Progress, which took place on Northerly Island in 1933 and 1934.

Over the years, the historic Adler Planetarium has had several additions. Among them, the glassy Sky Pavilion annex, designed by Lohan Associates, curves around the old building. Although views of the east façade of Grunsfeld’s original structure are obstructed today, Iannelli’s modernistic capitals can still be seen— some along the outside, and the others inside the building.