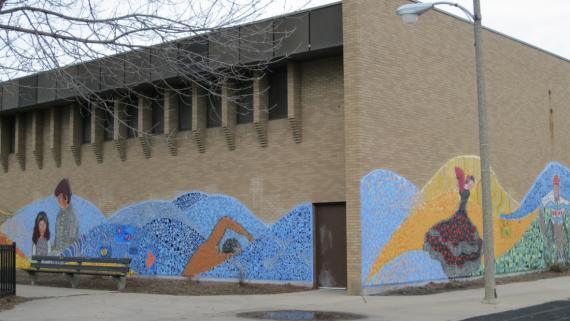 Common Threads is a brightly colored bricolage mosaic that adorns two facades of the Chase Park field house. Funded by After School Matters, the artwork was produced by Green Star Movement, a nonprofit organization devoted to creating large-scale mosaics that celebrate diversity, urban life, and the natural environment. The mosaic was originally designed for the exterior of the Loyola Park field; however, the location was later deemed inappropriate due to the historic significance of the building. The Chase Park field house was selected as the final site because it is not architecturally noteworthy and could accommodate the 12-by-170-foot composition.

Artists Kamelia Hristeva and Anna Soltys conducted workshops with high school students at Loyola Park in 2010, during which they developed ideas for the artwork and taught the students how to make broken-tile mosaics. The students wanted the mosaic to highlight the vibrancy of Loyola Park and its surrounding neighborhood. It depicts a lady weaving, an adult mentoring a child, a disabled athlete, a swimmer, and an ethnic dancer. The weaver works with multicolored yarn, representing the way in which the park helps to knit together the diverse community.

In 2012, a second group of students carried out the final stages of the project in Chase Park. The mosaic is installed on panels to prevent damage to the brick surfaces of the building.