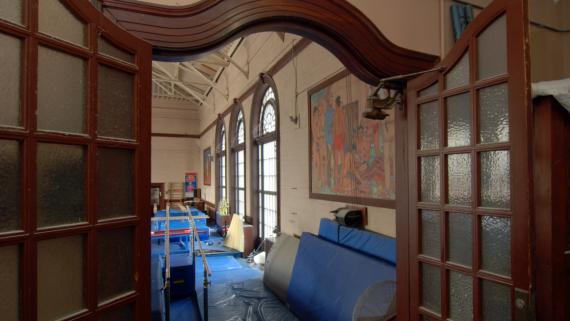 Spanning 200 acres on Chicago’s southern lakefront, Calumet Park is located in the heart of the Calumet River basin. An early center of trade between Native Americans and French explorers, the area takes its name from the Norman-French word chamulet (pipe), a reference to Native American peace pipes.

These four oil-on-canvas murals commemorate the burgeoning trade system in the region. In the first scene (southeast wall), Native Americans gather around a fire perhaps in an act of ceremonial ritual. Next (northeast wall), Father Jacques Marquette addresses a group of natives while traders unload goods from a canoe; the priest’s raised left arm and open bible suggest a gesture of blessing. In the third scene (northwest wall), hunters return to their village bearing the fruits of their excursion and are welcomed heartily by their wives. Finally (southwest wall), traders lay out beads, guns, and other utensils on large gingham blankets perhaps to exchange them for fur pelts.

The series was made possible by the Art Fund established in 1909 by Judge John Barton Payne. Dedicated to the decoration of the buildings of the South Park System, the Art Fund became known as the Payne Fund when its administration was turned over to the Art Institute of Chicago in July 1926. According to records of a committee meeting on November 9, 1926, sculptor Lorado Taft recommended “as the first project the installation of murals in Calumet Park Field House.” The artist Tom Lea (1907–2001) was selected for the project.

Originally from El Paso, Texas, Lea studied at the School of the Art Institute from 1924 to 1926, at which point he began apprenticing his previous teacher noted muralist John Warner Norton. The pair worked on several important commissions, including the vaulted ceiling mural for the Chicago Daily News Building (1929). Norton had a profound influence on Lea, who described his teacher as having “a sharp and constructive mind, a deep humility, and the integrity of a great man.” The relationship must have been mutual, for after Norton’s death in 1934, Lea inherited his easel.

Lea went on to have an illustrious career of his own. He is celebrated for his art and writing, both of which embody themes of the American West. After returning to the Southwest in 1933, he was briefly employed by the Works Progress Administration. He won a national competition held by the United States Department of Treasury for the Benjamin Franklin Post Office in Washington, D.C., which resulted in one of his best-known works, The Nesters (1935). Lea also served as a Life Magazine correspondent during World War II, covering the action in the South Pacific. Two of his novels—The Brave Bulls (1949) and The Wonderful Country (1952)—were turned into major motion pictures. Today, the Tom Lea Institute in El Paso is committed to carrying on the artist’s legacy through education and collaboration.