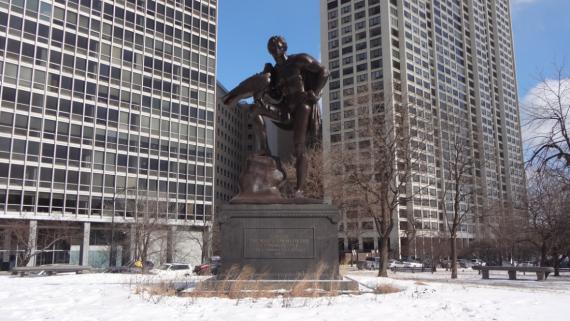 This heroic statue pays homage to famous German writer and philosopher John Wolfgang von Goethe (1749–1832). In 1910, the Goethe Monument Association held a competition to select a sculptor for the memorial. The committee did not want a figurative portrait of Goethe, but rather, a sculpture that would embody the “spirit of Goethe.” The members of the committee hoped to release artists “from the trammels of costume and conventionality” and permit them “to give free flight to their imagination and enthusiasm.” At the time, the Lincoln Park Commissioners had also decided to discourage the installation of conventional portrait busts in the park. Nine sculptors submitted proposals to the Berlin-based jury, and after the winner was selected, the Art Institute of Chicago hosted an exhibit in 1911 of all nine competition models.

Herman Hahn (1868–1944), a professor and sculptor from Munich, Germany, submitted the winning proposal. He envisioned an enormous figure of a young man—reminiscent of a Greek god—holding an eagle on his knee that symbolizes Goethe’s “Olympian achievements.” Hahn’s design includes a low wall with a bas-relief portrait of Goethe, as well as a quotation from his famous tragic play, Faust, in both German and English. The installation also has a seating area with benches.

After its completeion, the critics lampooned the Monument to Johann Wolfgang von Goethe in the ChicagoTribune for several weeks. In response, one of the competition’s judges, Karl Bitter, defended the committee’s choice, arguing; “after conscientiously deliberating for three days, we chose this design unanimously and enthusiastically.” Modeling and casting the monument in Germany, Hahn rendered the sculpture in bronze with a rich brown patina. The massive eighteen-foot-tall statue weighs eighty tons.

Over the years, the Monument to Johann Wolfgang von Goethe has been repaired and conserved several times. It suffered extensive damage in 1951, when lightning struck the figure’s left foot. The Chicago Park District removed the statue, recast the foot and ankle in one piece, and had the newly created bronze element reattached. In 1998, the national non-profit organization, Save Outdoor Sculpture!, awarded a grant to the Chicago Park District, for a major conservation of the Goethe Monument. In recent years, the Park District also restored the sculpture’s landscape setting and installed additional lighting.