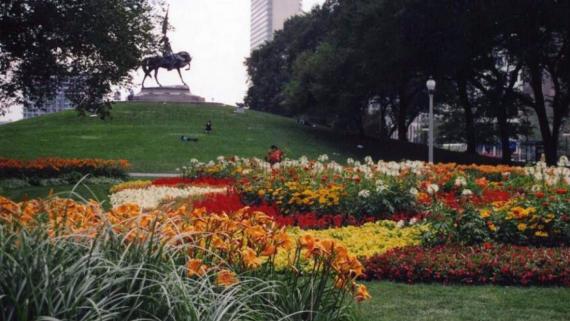 Illinois-born John Alexander Logan (1826–1886) was a remarkable war hero and political figure. After serving in the Mexican-American War, Logan studied and practiced law, served several terms as a Democratic Illinois State Representative and then as a United States Congressman. Logan entered the Civil War as a colonel and quickly work his way up to the rank of general.

After the war, Logan switched parties and represented Illinois in the United States House of Representative and the Senate for several terms as a Republican. Nominated for Vice President on John Blaine’s ticket in 1884, the two were not elected. Logan did, however; achieve great fame as head of the Grand Army of the Republic, an organization of Union Army veterans. On behalf of this organization, he recommended the creation of Memorial Day, known originally as Decoration Day, and first observed on May 30, 1868.

Shortly after Logan’s death in 1886, the Illinois state legislature appropriated funds to create a memorial to him in Chicago. The South Park Commission provided the site and the granite base. The monument had been intended as the burial place for Logan and his wife. Although his widow planned to have his remains moved to the tomb from Washington D.C. along with her body after her death, this never occurred. As a result, the tomb has always been empty.

Renowned artist Augustus Saint-Gaudens (1848–1907) sculpted the bronze figure of Logan, while Alexander Phimister Proctor (1862–1950) created the horse. Proctor was an observer of American wilderness and a sculptor who had exhibited his work at the World’s Columbian Exposition in 1893. The General John Alexander Logan Monument is among the city’s most recognizable sculptures, particularly since it sits above the hill-like tomb. A wreath laying ceremony is often held at the monument on Memorial Day, prior to the city’s annual parade, which is one of the largest in the nation.