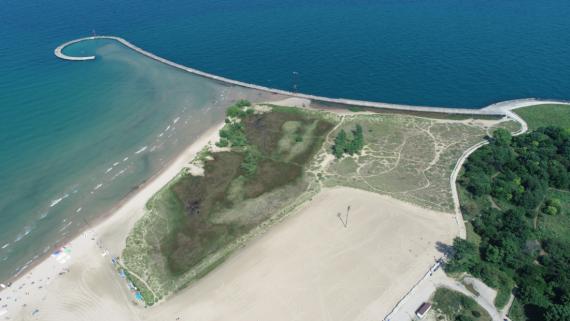 Due to the recent hatching of several Piping Plover chicks at the dunes, this natural area is currently closed to all park patrons through mid-August. Please check back for updates.

The Montrose Beach Dunes are a 13 acre natural area located on the eastern end of Montrose Beach within Lincoln Park. The area was originally formed by landfill, but has now become shaped by natural processes. In 2001, the Chicago Park District stopped grooming the area to encourage dune formation. As a result, the dunes now contain beach, panne, and foredune habitats, which support six state threatened or endangered plant species monitored by Chicago Wilderness Plants of Concern Program.  The dunes are an important resting point for foraging migrating and resident shore birds. Over 100 bird species have been recorded utilizing this site. This area has received bountiful recognition since its natural area inception. In 2005, the Montrose Beach Dunes were designated worthy of protection by the Illinois Department of Natural Resources. This merit for protection arose from the unique panne habitat of natural wet depressions in the dunes. In 2007, the Illinois Department of Natural Resources granted the Park District funds for restoration work at the dunes. In the summer of 2007, an additional acre was added to the natural area.

Much work has been done to get this natural area to its current state of health. The dunes have benefited greatly from the dedication and hard work of community volunteers who collect and scatter native seed, plant native species, pick up trash, monitor vegetation and birds, and remove invasive species. Learn more about these kinds of volunteer opportunities by visiting our Community Stewardship Program page.