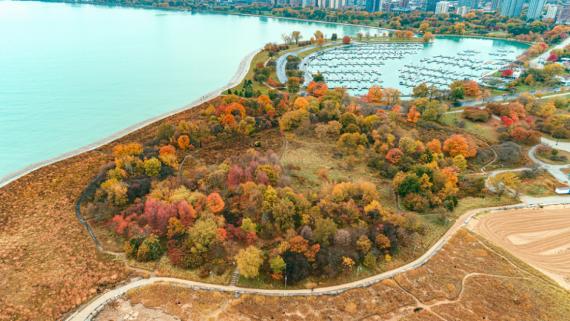 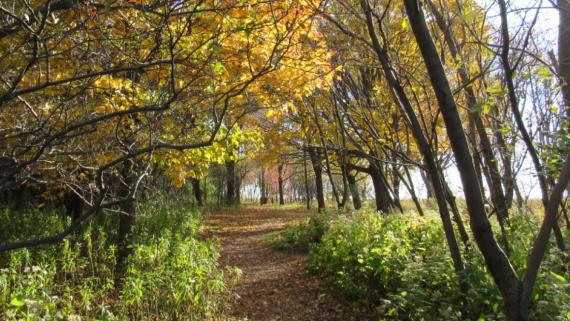 Located in Lincoln Park, Montrose Point Bird Sanctuary is a 15.6-acre natural area that attracts tens of thousands of migratory birds to stop for rest, food, and shelter each spring and fall. Within the natural area is “The Magic Hedge”, a 150-yard stretch of shrubs and trees, so-called because it attracts a curiously high number of migratory birds. Over 300 species of birds have been recorded at Montrose Point Bird Sanctuary and the adjacent Montrose Beach Dunes Natural Area, making it an internationally recognized area for birding. Important migrants include most species of warblers seen in the Chicago area, thrushes, sparrows, purple martins, woodpeckers, owls, and many others.

“The Magic Hedge” did not just appear on its own. In the mid-20th century, the Army leased land at Montrose and built two barracks. Honeysuckle was planted to screen them from public view. Long after the Army left, the honeysuckle, now known to be an invasive species, remained and still forms the basic feature of The Magic Hedge. Ecological enhancements to the area first began in the 1980s, with the introduction of bird-friendly native shrubs such as nannyberry, serviceberry, and sumac.

In 2015, the Chicago Park District and partners, with the input of community members and other stakeholders, created the Montrose Point Bird Sanctuary Master Plan to help guide future management of the site. The bird sanctuary increased in size in 2017 with the creation of a butterfly meadow at the west end of the site. The installation of an ADA-accessible trail is planned for 2021, making it easier for a wider range of people to explore one of the most important birding destinations in Illinois.

Birding organizations continue to help with public education about the importance of the site, and much of the work that has been done to get the site to its current state of health has been through the support and leadership of dedicated community volunteers. Learn more about ways to get involved in the stewardship of this site by visiting our Community Stewardship Program page.

Chicago Park District recently received a grant from the Illinois Department of Natural Resources to install an ADA-accessible pathway at Montrose Point Bird Sanctuary. This grant supports another step in the implementation of the Montrose Point Bird Sanctuary Master Plan (2015), which was developed through a thoughtful, stakeholder-involved process.

Trail construction will begin after June 1, 2021, and will result in an eight-foot wide, 1/3-mile long loop that will travel near the areas known to many as the Magic Hedge, the Magic Clump, and the Tangle. For additional information, refer to the 2015 Montrose Point Bird Sanctuary Master Plan and 2017 Project Design Presentation.

2013: The Illinois Department of Natural Resources (IDNR) and the U.S. Fish and Wildlife Service (USFWS) award grants to the Chicago Park District (CPD) to support the development of the Montrose Point Bird Sanctuary Master Plan.

2015: The Montrose Point Bird Sanctuary Master Plan is published. The USFWS awards a grant to CPD to support the construction of the Butterfly Meadow expansion.

2017: The Butterfly Meadow is installed. The Illinois Coastal Management Program awards a grant to CPD to support the development of engineering designs for structural improvements at Montrose Point. CPD convenes a public meeting to discuss draft engineering plans for entrances, pathways and a water feature.

2018: CPD applies for a grant to support the construction of an ADA-accessible loop trail at Montrose Point.

2020: The IDNR Recreation Trails Program awards a grant to CPD for the construction of an ADA-accessible pathway at Montrose Point. 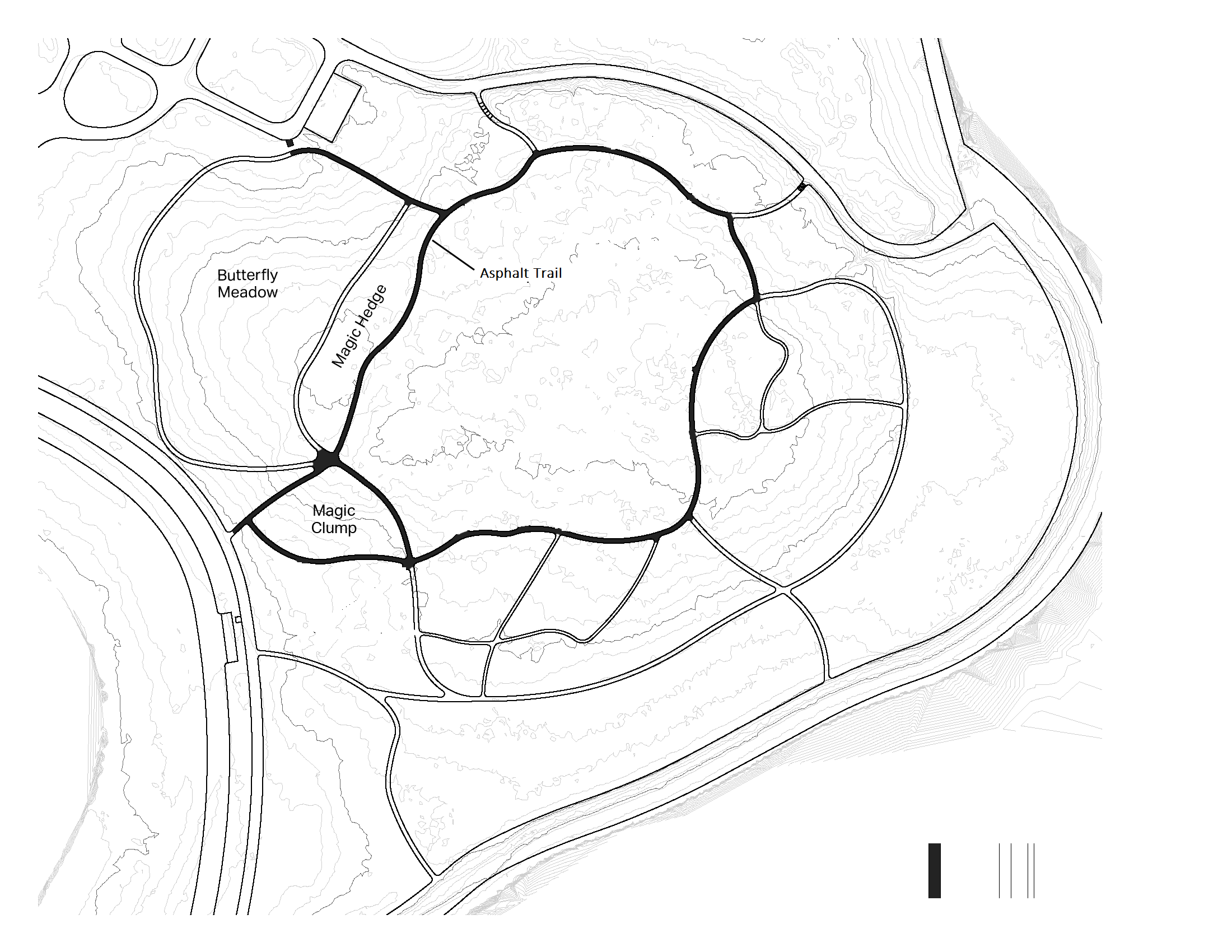 CLICK HERE to see the image at larger scale. 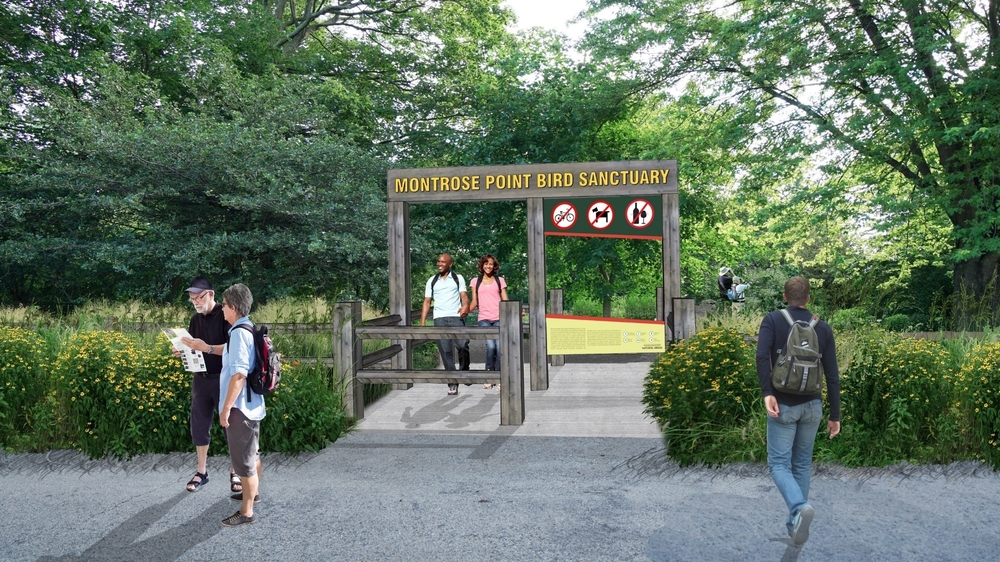 CLICK HERE to see the image at larger scale.

Q: What is the footprint of the new trail?
A: The new asphalt trail will be an 8-foot wide, 1/3-mile long loop that travels near the areas known to many as the Magic Hedge, the Magic Clump, and the Tangle. In many places, this will be narrower than the current mulch trails. As Illinois’ most popular birding site, Montrose Point currently suffers from mulched paths that have expanded over time (15 feet or wider in some places), which makes it difficult if not impossible for the areas around the pathways to support thriving plant communities.

Q: Why use asphalt and not another surface?
A: Other more permeable surfaces, like limestone and mulch, are not approved by the City of Chicago Mayor’s Office for People with Disabilities as wheelchair-accessible surfaces. They also require extensive maintenance and are subject to rutting and erosion. With a life expectancy of nearly 30 years, this asphalt trail will reduce the need for frequent disturbance and costly maintenance typical of other trail types that need to be “refreshed” every few years or more frequently.

Q: Will bicycles be allowed on this paved trail?
A: No. The entrances will have clear, simplified signage, as well as new physical barriers, to strongly discourage bicycles while still allowing those with wheelchairs, walkers, or other mobility aids to pass through. The main entrance along Montrose Harbor Drive will include an inviting, overhead welcome sign and a special “indirect pathway” which makes access by bicycle difficult. Large, simple signage indicating “No Bikes” and “No Dogs” will replace the current clutter of signs and will make it easier to understand what types of activities are not allowed at Montrose Point Bird Sanctuary.

Q: This is an important place for birds and the rest of nature. How will this project impact the habitat?
A: Off-trail trampling at Montrose Point, and many other Chicago parks, is extensive and has had a significant negative impact on native plants, wildlife, and soil health. The trail improvement project includes creating a smaller overall trail footprint, removing unintentional “desire” paths, and improving visual cues for intentional paths. Approximately five feet on either side of the asphalt loop trail will be disturbed by the installation process. These areas will be reseeded with native plants and a temporary cover crop (a fast-growing, non-invasive annual grass like oats or wheat). Areas disturbed by trail installation will remain relatively bare in 2021, as the seeds need time to germinate, establish, and flourish, but will start to fill in during the 2022 growing season. By 2023, as long as people stay on established trails, adjacent areas should be well established with native plants.

Q: When was this work planned?
A: The latest master plan for the Montrose Point Bird Sanctuary was finalized in 2015 after an extensive community engagement process. Engineering designs for structural improvements, including trails, fencing, and the not-yet-funded water feature, were prepared with community input in 2017. In 2018, Chicago Park District applied for a grant to support the construction of an ADA-accessible pathway at Montrose Point; and, in 2020, the Illinois Department of Natural Resources’ Recreational Trails Program awarded a grant to CPD for this project.

Q: When will this construction take place?
A: Work on the trails will begin no sooner than June 1, 2021, and is expected to be completed by August 1, 2021 in order to have minimal impact on bird migration. Restoration of desire trails (areas trampled by visitors going off-trail) and any other areas disturbed by trail installation activities will likely occur in 2022. Additional planting will occur in the spring of 2022.

Q: The 2015 Master Plan calls for more than improved trails. What's next?
A: Chicago Park District is actively seeking funds to implement other elements of the Montose Point Master Plan, including a larger, much improved water feature in the central meadow for which there are completed design and engineering plans. Ecological maintenance of this natural area will continue as well.