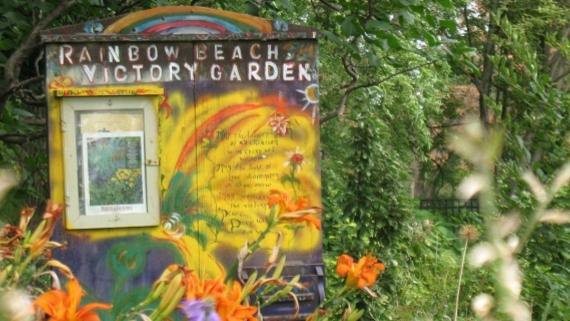 The history of our garden can be traced back to before depression era America when the "Victory Garden" concept was in full initiation following its World War I creation. However, it wasn't until World War II that we took on the title Victory Garden, and like so many other gardens in cities throughout the country contributed to the war effort. Since then, our garden has evolved with our city and community. From the Great Depression through the popularity of "urban farming" to Chicago's evolving south lake shore, our Garden has stood inviting individuals and families to be part of a "victory" garden community. Today, the RBVG is the last remaining victory garden in Chicago and has been featured on ABC Channel 7 News and noted by former First Lady Michelle Obama in her 2012 book American Grown: The Story of the White House Garden and Gardens Across America. Our members all share an interest in participating and teaching: a "seed to table" approach to gardening, respect for the earth, and respect for community. We invite families and individuals interested in being part of our garden community to google us at rbvg7900.wixsite.com/rbvg7900 learn more about us and visit the "Becoming A Member" page.