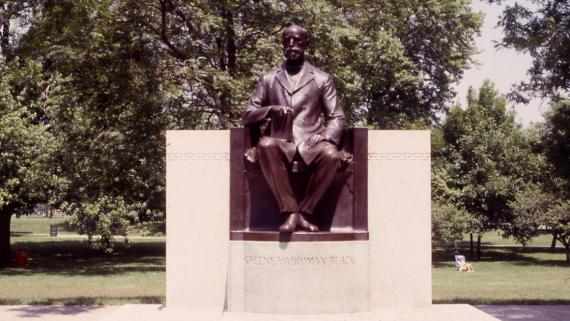 Donated by the National Dental Association, this monument honors Greene Vardiman Black, the father of modern dentistry and first dean of Northwestern University’s dental school. More than fifteen hundred members of the association attended the unveiling ceremonies for the Greene Vardiman Black Monument in 1918.

Greene Vardiman Black (1836–1915) grew up on a farm near Winchester, Illinois. He studied under an older dentist, Dr. J.C. Spear in the late 1850s, a time when the science of dentistry was extremely rudimentary. After the Civil War, Black began making important contributions to dentistry. These include inventing the dental drill, using nitrous oxide for extracting teeth without causing pain, and developing the method for filling cavities which is still used today.

Soon after G.V. Black’s death, the National Dental Association commissioned Frederick C. Hibbard to produce the monument. Hibbard portrayed Black as distinguished-looking man, seated, with a book propped on his knee. The bronze figure is mounted on a limestone bench-like base.

A disciple of renowned Chicago sculptor Lorado Taft, Frederick Cleveland Hibbard (1881–1955) produced over seventy works of permanent sculpture throughout the nation. Among his artworks are two monuments of Confederate president Jefferson Davis in Alabama and Kentucky, an Abraham and Mary Todd Lincoln Monument in Racine, Wisconsin, and a Mark Twain Monument in Hannibal Missouri. His Chicago sculptures include the Eagle Fountains in Grant Park, Garden Figure in the Lincoln Park Conservatory, Carter Harrison Monument in Union Park, and two bas-relief panels on the façade of the Calumet Park field house. Working with his wife, Elisabeth Haseltine Hibbard, he also sculpted the Wallach Fountain in Burnham Park.