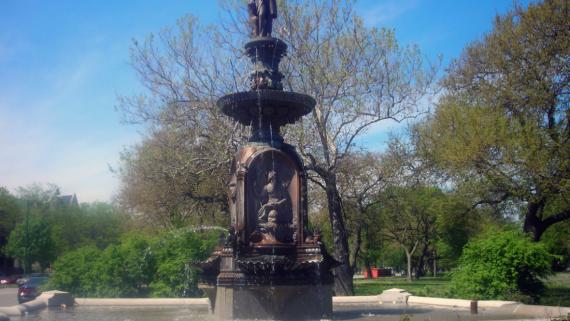 In 1881, the South Park Commissioners accepted the gift of the Drexel Fountain from Francis A. and Anthony J. Drexel. The two brothers commissioned the $40,000 sculptural fountain to honor the memory of their father, Francis M. Drexel (1792–1863), a Philadelphia banker and real estate speculator. Drexel helped spur the early growth of the Chicago’s South Side by donating local property that he had purchased in the 1840s so that it could be developed as a street. His sons believed the monument to be especially fitting because the South Park Commissioners had recently renamed an existing pleasure drive east of Washington Park as Drexel Boulevard.

Soon after the renaming of the boulevard, the Drexel brothers hired Henry Manger, a German immigrant who had setted in Philadelphia, to create the fountain. Relatively little is known about Henry Manger (b. 1833). Sometimes listed as Heinrich Manger, the artist created a number of works in America including the Wilcox Soldier’s Monument in Madison, Connecticut; and the Schiller Monument in Philadelphia’s Fairmount Park.

Chicago's elaborate bronze and granite ornamental fountain includes a figurative sculpture of Francis M. Drexel above an upper basin. A four-sided bronze pedestal below has intricate bas-relief sculptural panels featuring Neptune riding a dolphin, a harvest goddess gathering grain, and other scenes. In 1888, six years after the installation of the monument, the Drexel brothers spent an additional $5000 to enlarge the fountain and provide jets to allow water to run continuously.

Over the years, the historic fountain has fallen into disrepair several times. The Chicago Beautification Committee and Department of Public Works restored the monument in 1975. In the early 2000s, the Chicago Department of Transportation and the Public Building Department also made significant repairs to the historic Drexel Fountain as part of a city-wide fountain program. Today, the Drexel Fountain is the oldest existing public sculpture in any of Chicago’s parks.