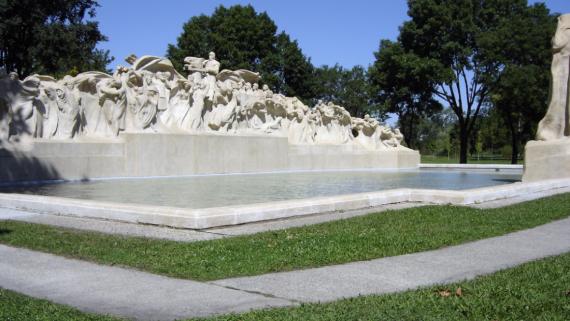 Considered the masterpiece of sculptor Lorado Taft, the Fountain of Time is one of Chicago's most significant historic artworks. Born in Elmwood, Illinois, Lorado Taft (1860–1936) studied at the University of Illinois and went on to receive a master's degree from the École des Beaux-Arts in Paris. After returning to Chicago in1883, he opened a studio and began teaching at the Art Institute of Chicago. He also later taught at the University of Chicago, eventually moving his studio to a nearby converted barn which became known as Midway Studios. Taft played an important role as a sculptor for the World's Columbian Exposition and also produced an impressive collection of permanent outdoor artworks including the Fountain of the Great Lakes in Chicago, Lincoln the Orator in Urbana, Illinois, and the Columbus Memorial in Washington, D.C.

Taft spent more than a decade on the Fountain of Time, the project that he described as “his best thought.” He was inspired by poem by Henry Austin Dobson entitled "The Paradox of Time." The poem includes the following repeating couplet: “Time goes, you say? Ah, no: Alas! Time stays, we go!” The monument is composed of an ominous cloaked Father Time figure looking over a reflecting basin towards a wavelike procession of 100 human figures. Babies and children are on the eastern end—soldiers, workers and lovers in the center—and the most elderly figures at the western end.

Although Taft had planned to carve the work out of stone, he decided that that it would be difficult and costly to create the sculpture that way. He conferred with engineer and sculptor John J. Earley (1881–1945), who had recently invented a type of concrete construction that allowed for an enhanced use of color and texture. Relying on this new method, Taft had assistants, students, his own three daughters serve as models for the figures. He also included a self portrait at the rear of the sculpture. The B.F. Ferguson Fund of The Art Institute of Chicago commissioned the monument to commemorate the hundredth anniversary of an 1814 peace treaty between America and Canada. The Fountain of Time was dedicated on November 15, 1922.

Over the years, Chicago’s freeze/thaw cycle, pollution, and improper repairs had caused tremendous harm to this great artwork. The Chicago Park District and Art Institute of Chicago conducted a fifteen-year effort to conserve the monument. This $2 million project, which relied on public and private funds including a Save America’s Treasures Grant, was completed in 2007.