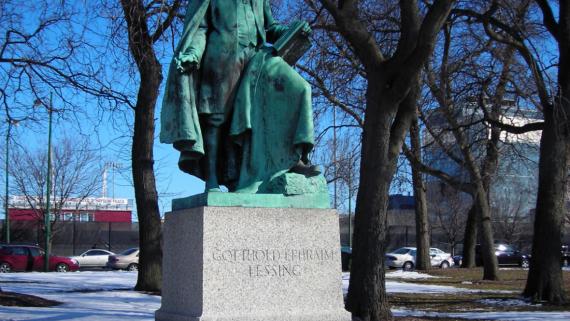 Businessman and philanthropist Henry L. Frank left a bequest of $25,000 for a Gotthold Ephraim Lessing Monument when he died in 1926. Frank was from a prominent family of German Jewish immigrants. His uncle, Michael Reese had donated money for a South Side hospital that was established in 1881 to provide medical services to the underprivileged.

Michael Reese had also helped several members of his family to migrate from Bavaria to America. His sister’s son, Henry L. Frank (1839–1926) arrived here at the age of twelve and made a fortune in wholesale dry goods business and real estate. He also had a sizeable inheritance from his mother. Frank devoted the last twenty years of his life to philanthropy, leaving $750,000 to charity and the arts, including the donation of this monument to German writer, critic and philosopher, Gotthold Ephraim Lessing (1729–1781). Often considered the father of modern German drama, Lessing is best known for his 1748 work Der Junge Gelehrten, which translates to The Young Scholar in English. Lessing was rejected by the church during his lifetime and later maligned by repressive forces in Europe during the 1930s and ‘40s. His writings writings were well appreciated in the United States for exemplifying many principles of the Enlightenment.

Executors of Frank’s estate commissioned Albin Polasek (1879–1965) to sculpt the Gotthold Ephraim Lessing Monument. Polasek, who headed the sculpture department of the School of the Art Institute of Chicago for nearly 30 years, produced many public sculptures for the Czech Republic and America. In Chicago, Polasek’s work includes the Spirit of Music (Theodore Thomas Memorial) in Grant Park and Thomas Masayrk Monument on the Midway Plaisance.

Although the executors had wanted to place the Gotthold Ephraim Lessing Monument on the Wooded Island in Jackson Park, Chicago Park District administrators did not want to detract from the natural beauty of that site and offered this Washington Park location as an alternative. The statue was presented to the South Park Commission and unveiled on November 2, 1930.