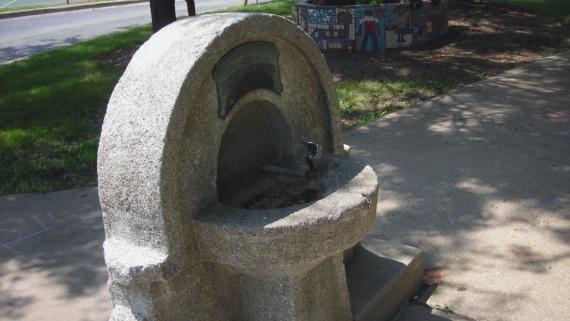 This memorial drinking fountain is dedicated to David Andrews (1807 - 1885) a civil engineer and early government surveyor who mapped areas south of Chicago. Born in New Jersey, Andrews worked and lived in Northhumberland County, Pennsylvania, before coming to Chicago in 1834 to work in a United States Land Office. Andrews purchased 360 acres in an area then known as Kensington, now West Pullman. Alfred T. Andreas, author of an early History of Cook County wrote that at the time Andrews and his family lived in the area "prairie wolves, deer and prairie chickens abounded, and occasionally, a lynx was seen." Andrews's daughter, Mary F. Becker (1841 - 1915) donated the drinking fountain. It was installed in 1916, the year after her death.

Location: Exterior in from fieldhouse.