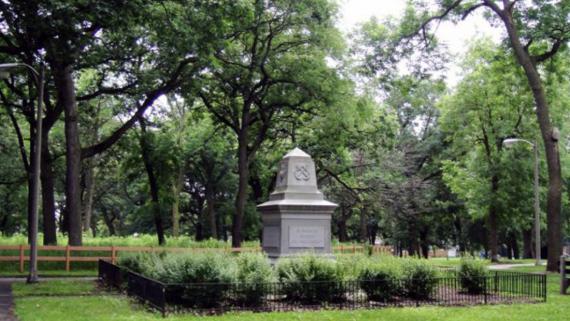 The West Pullman Improvement Association donated this WWI Memorial. The monument honors 7000 soldiers and sailors from the community who died in the war. The association raised $10,000 for the memorial which was unveiled on Labor Day in 1919. The dedication ceremony included a parade of ex-servicemen in uniform and speeches by dignitaries such as Samuel Fallows, a Civil War veteran who had become well known for his efforts in temperance, prison reform, and public education.

The WWI Memorial originally included a granite base with bronze plaques listing the names of serviceman who died in action. Above the base, an upper granite pedestal has ornamentation in sculptural relief relating to the Army and Navy and an inscription to the “heroic youth who served in the world conflict.” A bronze eagle with outstretched wings originally topped the upper pedestal.

In 1942, the monument's bronze plaques were removed and melted down and used in the World War II effort. The missing plaques were later replaced with granite panels that memorialize the servicemen who died in other wars including the Korean conflict and WWII. Unfortunately, the bronze eagle has never been recovered.

Gallery:
West Pullman Park: WWI War Memorial
Date Posted: 7/22/2015 By the early 1940s, the monument was still topped with the original sculptural eagle, but its…
Advertisement