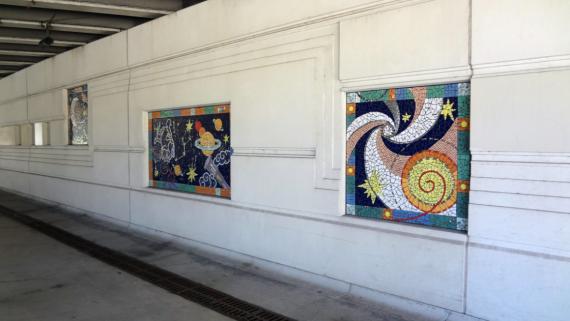 Lead artist Mirtes Zwierzynski worked with elementary and high school students in Hyde Park to create a series of mosaics that beautify two pedestrian underpasses that link the Museum of Science of Industry with the 57 Street Beach. Many of the panels have imagery relating to the museum and the park. Examples include a colorful pastiche that incorporates a vintage train, an airplane propeller, as well as gears and other machine parts. Another panel illustrates iconic elements of Jackson Park such as the golden Statue of the Republic and Moon Bridge in the Japanese Garden. Other panels make strong references to the beauty, cultural vitality, and rich diversity of the Hyde Park community. Numerous cultural and civic organizations worked with government agencies to sponsor this project including the Chicago Public Art Group, After School Matters, Harper Court Arts Council, Hyde Park Arts Center, and the Chicago Department of Transporation.