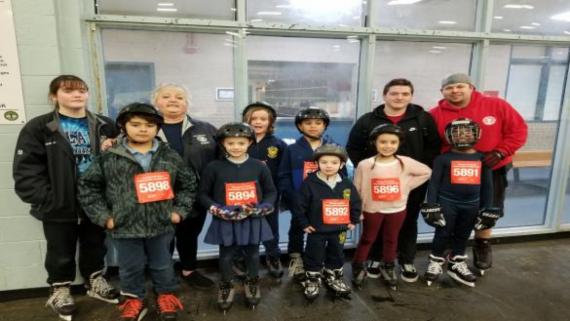 Congrats to our 2020 Silver Skates Competitors!

Our kiddos enjoying the nice weather!

Our kiddie college kiddos are just the cutest!

We love our staff!

Brands Park bears the name of the German-American family that owned the site for many years. Formally established as a park in the 1920s, the property was used as a picnic grove for years before. The Brands grove had local notoriety as the site of many Clan-na-gael, Schwabenverein, and old settlers' picnics. Shortly after the 1917 formation of the River Park District, one of 22 independent park commissions consolidated into the Chicago Park District in 1934, residents of the Avondale neighborhood petitioned the new park board to purchase the Brands Picnic Grove site. Negotiations with the property owner proved difficult, and land acquisition was not completed until 1927. Improvements began in 1928, following plans developed by the Chicago Landscape Company. The new facilities included a playground; basketball, horse shoe, and tennis courts; and an athletic field that was flooded for ice skating in winter. These recreational features were set in an attractive landscape of lawn and trees. The River Park District adapted an existing building on the site for fieldhouse purposes. Shortly after the Chicago Park District took over Brands Park in 1934, Chicago architect Clarence Hatzfeld enlarged and remodeled the fieldhouse to include club, game, and shower rooms; a workshop; and a community hall. In the mid-1970s, the park district demolished the old brick structure, which had deteriorated significantly. In its place, the district built a new, larger fieldhouse, redesigning the surrounding landscape. More recent improvements included rehabilitating the playground, tennis courts, and plantings.