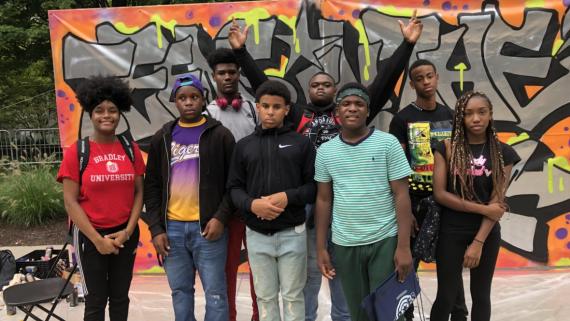 Soon after World War II, the Chicago Park District began a major initiative to create new parks for the first time in many years. This Ten Year Plan identified 43 sites in neighborhoods with few recreational facilities and in undeveloped areas which were starting to boom. In 1948, the third year of the effort, the park district acquired 22 new park sites, including a 16-acre, L-shaped property in the Auburn Gresham neighborhood. Because of the flurry of new construction, the park district did not begin improving Dawes Park until 1954. By the early 1960s, the new park included a picnic grove, an athletic field, a children's playground, a running track, tennis courts, and a small fieldhouse. In the 1990s, the park district constructed a soft surface playground and undertook a major tree planting program there. The park's name honors Charles Gates Dawes (1865-1951) a lawyer, soldier diplomat, and United States Vice President who had important ties with Chicago. After attending the Cincinnati Law School and living briefly in Nebraska and Ohio, Dawes settled in Evanston, Illinois. He entered politics, assisting in William McKinley's presidential campaign. McKinley rewarded Dawes by appointing him as Comptroller of the Currency. During World War I, Dawes joined the army, working his way up to Brigadier General. He authored the Dawes Plan, a proposal for rebuilding Europe after the war, and was awarded with the Nobel Peace Prize. Between 1925 and 1929, Dawes served as Vice-President under Calvin Coolidge. In that capacity, he was instrumental in Chicago's successful bid to hold a second World's Fair, the Century of Progress, which opened in 1933. Dawes authored eight books on banking and government. His many philanthropic causes included a Chicago homeless shelter built in 1913.