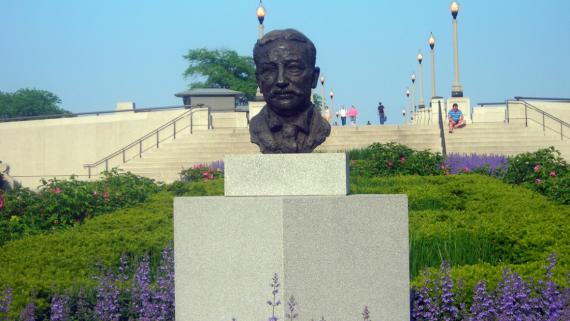 Aaron Montgomery Ward (1844–1913) founded the world’s first mail-order retail business in 1872 in Chicago—which soon evolved into the nation’s leading department store chain. In 1890, Ward began a twenty-year legal battle to keep Grant Park “open, free, and clear.” He withstood intense public criticism for his campaign to prevent the construction of the Field Museum and other buildings on Chicago’s “front yard.” During his third lawsuit in 1909, Ward told the Chicago Tribune, “Had I known in 1890 how long it would take me to preserve a park for the people against their will I doubt if I would have undertaken it.” Despite extreme costs in terms of both reputation and his own personal fortune, Ward continued with a fourth lawsuit in the State Supreme Court, which he won in 1910.

Russian-American artist Milton Horn (1906–1995) created the Aaron Montgomery Ward Portrait Bust. The sculpture is a scaled-down version of a larger bust that was added in 1972 to a series memorializing significant Chicago businessmen at the Merchandise Mart Hall of Fame. In 1993, Montgomery Ward & Company’s corporate office donated the smaller version. The Montgomery Ward Foundation and the Friends of the Parks provided funds for its installation in Grant Park. Removed six years later to make way for Millennium Park, theartwork was relocated to current site on the southwest side of Grant Park and rededicated in 2005. The bust honors Ward’s role as “watch dog of the lakefront.” Its plaque reads, in part, “Grant Park is his legacy to the city he loved… his gift to the future.”