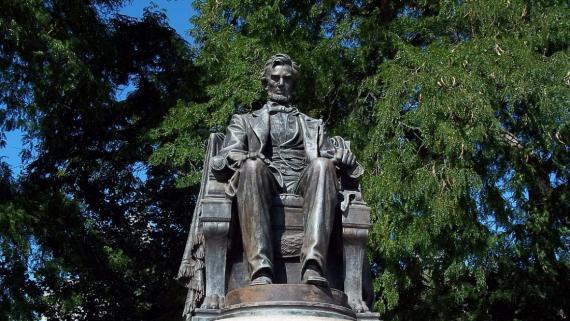 Located in the north Court of Presidents, north of E. Congress Parkway and west of S. Columbus Drive

Officially known as Abraham Lincoln, Head of State, this solemn Seated Lincoln is one of two Abraham Lincoln monuments in Chicago created by Irish-born sculptor Augustus Saint-Gaudens (1848–1907), who is lauded as one of America’s greatest nineteenth century artists. While some consider Saint-Gaudens’s Standing Lincoln in Lincoln Park (formally known as Lincoln: The Man) superior to this sculpture, others feel that the Seated Lincoln is especially successful for evoking the sense of loneliness that burdened President Lincoln during the Civil War.

Having spent twelve years on this sculpture Saint-Gaudens didn’t live to see its installation in Grant Park. Businessman and philanthropist John Crerar (1827–1889) left a sizeable endowment for a new library and “a colossal statue of Abraham Lincoln” in his will.  Saint-Gaudens received the commission to create the artwork in 1897 and completed a first model, but it was destroyed in a 1904 fire in his studio.  He created another version which was ready for casting in 1906. At the time, Chicago’s famous architect and planner Daniel H. Burnham wanted to install this sculpture and a George Washington monument near a proposed new Field Museum building in Grant Park.  He intended for the building serve as the centerpiece of Grant Park. This scheme was problematic however, because early restrictions prohibited the construction of buildings in the park. Mail-order magnate Aaron Montgomery Ward launched a series of lawsuits to protect the lakefront open space from any obstructions. After Ward won the final suit in late 1910, development of the park continued to be delayed for several years. During that long period, the Seated Lincoln was displayed at the Metropolitan Museum of Art in New York and at the 1915 San Francisco Exposition.

In 1924, the South Park Commissioners finally agreed upon the sculpture’s permanent site on the north side of what became known as the Court of Presidents. Two years later the bronze figure was finally erected on a 150-foot-wide marble setting designed by architect Stanford White. Although the commissioners wanted to follow Burnham’s recommendation and mirror the Lincoln with a George Washington sculpture, this was never realized, and the Seated Lincoln remains as the only permanent monument on the Court of Presidents.