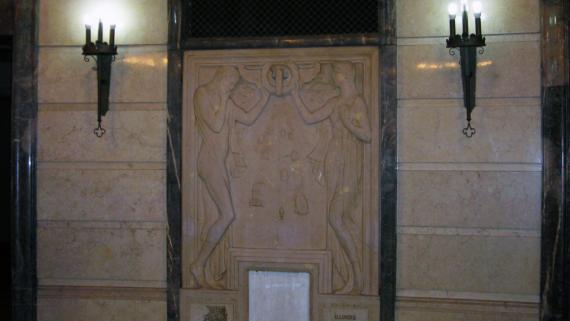 A series of four eight-foot-tall bas-relief sculptural panels adorn the interior of the rotunda in Garfield Park’s impressive Gold Dome Building. The West Park Commissioners built the structure in 1928 as their own administrative headquarters, and spared no expense for its lavish details of cut stone, terra cotta, ornamental plaster, and terrazzo, as well as the ornate gilded dome. The commissioners hired renowned sculptor Richard W. Bock to create these relief panels celebrating the achievements of the twentieth century such as modern roadways, art and architecture, and park building. In one of the panels, allegorical figures in togas representing “art” and “architecture” are holding up a representation of the Gold Dome Building itself.

Richard Walter Bock (1865–1949) emigrated from Germany to Chicago as a young child. After he received training as a sculptor at the Berlin Academy and the École des Beaux-Arts in Paris, he returned to America and opened a studio in Chicago. He soon won a national competition to create an artwork for the Indianapolis Public Library and received sculpture commissions for two of the major buldings at the 1893 World’s Columbian Exposition in Chicago.

In 1892, while working on the World’s Fair sculptures, Bock was selected by one of Chicago’s most influential architects, Louis Sullivan, to produce interior sculptures for the famous Schiller Building, which was later demolished. Through this project, Bock met Frank Lloyd Wright, a young designer in Sullivan’s office who went on to receive international acclaim for spearheading the Prairie School of Architecture. In 1896, Wright asked Bock to create a sculptural frieze for the Heller House in Chicago. The two men became friends and worked together on the Dana-Thomas House in Springfield, Illinois, and Midway Gardens in Chicago. Bock also created sculptural embellishments for Wright’s own home and studio in Oak Park, Illinois as well as the Horse Show Fountain in a nearby park.

Bock executed the Garfield Park panels in 1929, towards the end of his career. Although the four wall-sized panels remain, today, each is missing a lower plaque, which may have been composed of bronze.