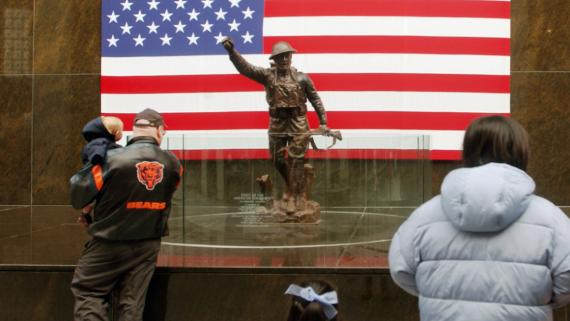 Between the mid nineteenth century and the 1920s, members of the United States Army and Marine Corps were often called “doughboys.” Although the origin of the nickname is unknown, one common theory is that the buttons on the infantrymen’s uniforms resembled a biscuit or dumpling. Soon after WWI, communities throughout the nation began installing American Doughboy sculptures to memorialize the role of infantrymen during the Great War. Sculptor E.M. Viquesney produced several versions of the memorial known as Spirit of the American Doughboy. Hundreds of copies were installed throughout America. Many of these sculptures have been carefully researched by Earl Goldsmith for the E.M. Viquesney Doughboy Database.

Ernest Moore “Dick” Viquesney (1876- 1946) served in the Spanish American War and devoted much of his life to honoring the nation’s veterans. Born and raised in Spencer, Indiana, he learned to sculpt, carve, and engrave from his father, Alfred Paul Viquesney. The younger Viquesney began making sketches of the Spirit of the American Doughboy in 1918. Within the next two decades, customers from all over the country purchased copies of the monument for installation in their own communities.

The gift of the 132nd Infantry (2nd Illinois), this Spirit of the American Doughboy was originally placed in Garfield Park. An identical sculpture had been erected in Lincoln Park, but it was removed in the mid-1940s after being severely damaged by vandals. A third Doughboy sculpture had been located in Palmer Park. Though similar, Palmer Park’s monument was called Over the Top and sculpted by John Paulding.

The 132nd infantry, known as the “Old Second” installed Garfield Park’s American Doughboy in celebration of the infantry’s fiftieth anniversary in 1926. Dedicated in tribute to the servicemen who gave their lives for our country in World War I, the monument also honors United States soldiers who gave their lives during the war with Spain (Cuban occupation, 1898-99), and the Mexican Border Conflict (1916). Several years after its original dedication, ceremonies were held to rededicate the monument to soldiers who had lost their lives during World War II.

Composed of copper alloy sheet metal with a hollow interior, the sculpture did not hold up well against vandalism. Sometime between the 1960s and the early 1980s, vandals crushed one of the figure’s arms and completely destroyed its head. After the damaged sculpture sat in storage for decades it was fully repaired and conserved in 2003. At that time, the Chicago Park District installed the Spirit of the American Doughboy in a new and prominent location near Gate O at Soldier Field.