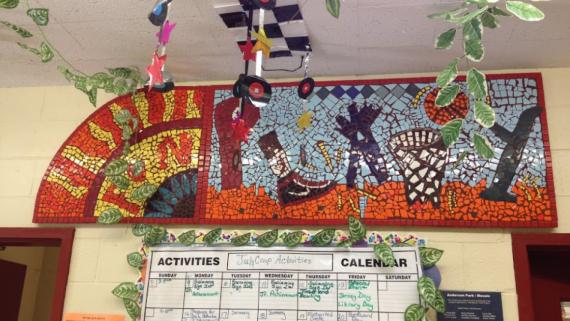 This colorful mosaic was one of several artworks produced in the late 1990s through the Chicago Park District’s Mosaic Parks Project. Although it lasted only a few years, the project supported the production of new mosaics in several Chicago parks, including Anderson, Ogden, Seward, and Washington.

The Anderson Playground Park mosaic was organized by the artist Jewell Pates, who worked with nine local children to create a mosaic embodying the theme of sports and recreation at the park. The main horizontal panel of the mosaic portrays a basketball scene, a reference to the park’s six outdoor courts. An abstract figure throws a ball toward a large white net, and a free-floating foot wears a shoe bearing the familiar Nike swoosh. To the left, a second, arched panel portrays yellow bands that evoke the sun’s rays. The word "FUN" appears below and seems to shine over the entire composition. Viewed as a whole, this playful outdoor scene captures the spirit of an afternoon at the park.

Gallery:
Anderson Park: Mosaic
Date Posted: 7/14/2015 The mosaic in the Anderson Park field house lobby was created by a group of students, under the…
Advertisement