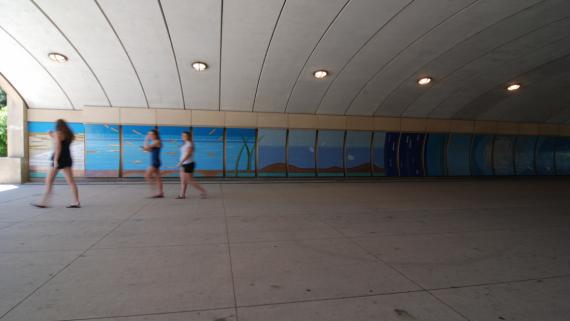 This expansive mosaic enlivens the Columbus Drive underpass to the Museum Campus in Grant Park. The project was sponsored by the Chicago Park District, the Chicago Public Art Group, and After School Matters. Artists Mirtes Zwierzynski and Maria Gaspar worked with a group of fifty students and several volunteers to design and produce the composition, which is mounted on sixty-four panels. Comprising 500,000 glass tiles, the 1,500-square-foot artwork is one of Chicago’s largest mosaics.

Entitled Aqua Interlude and Reflection, the serene, elegant composition portrays themes of water and the lakefront. Large expanses of varying blue, green, and gray tiles form a background of water and sky. Some of the scenes depict underwater activity, such as playful fish swimming through a dappled, swirling wave. Other elements suggest life above water, including two large sailboats, green reeds, and sandbanks. Still other motifs offer a sense of man’s imprint on the environment. A geometric network of pipes culminates in two faucets emitting drips and streams of light blue water. A set of crisscrossed white bars hints at the bottom of a lifeguard stand, and a gray structure represents a water tower.

Remarkably, the intricate mosaic was completed in just eight weeks. During that time, the dedicated group of artists, students, and volunteers collaborated closely and engaged in meaningful exchanges. Nineteen-year-old volunteer Monica Tantoco described the rewarding process: “Working with different types of people is a much better and more fulfilling experience than working as single unit. . . . The kids we were working with, they all had a general interest in this piece, in doing the art. That's the common ground. But we all come from extremely different backgrounds, which creates really interesting conversations between everyone." To acknowledge the diverse group of people who worked on the mosaic, each student or volunteer designed a small mosaic square including his or her initials. The signatures are incoporated at the west end of the mosaic.