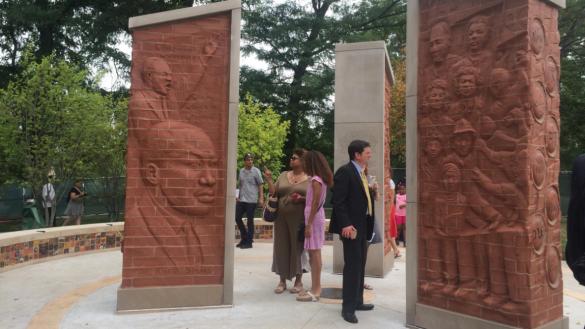 Chicago's parks are the settings for a world-class collection of nearly 300 fountains, monuments, and sculptures. These range from historic sculptures of famous people including Abraham Lincoln and Alexander von Humboldt, to some of the nation's most exciting new artworks such as Grant Park's Agora.

Some lesser-known artworks are hidden treasures in the parks, such as the Darius and Girenas Memorial, a sleek Art Deco style monument in Marquette Park. Others, such as the Clarence Buckingham Memorial Fountain or the Lions in front of the Art Institute, are so iconic that they have become symbols of Chicago.

Whatever your interest, come and explore artworks in the parks.

A number of these statues are talking. See who's talking where.  statuestorieschicago.com

Some of America's most beloved artists have contributed to Chicago's park system. Gutzon Borglum, sculptor of the Presidential Memorial in Mount Rushmore created Lincoln Park's John Peter Altgeld and General Philip Henry Sheridan monuments. Daniel Chester French, the artist of the Abraham Lincoln Memorial in Washington D.C. produced several Chicago sculptures including The Statue of the Republic in Jackson Park.