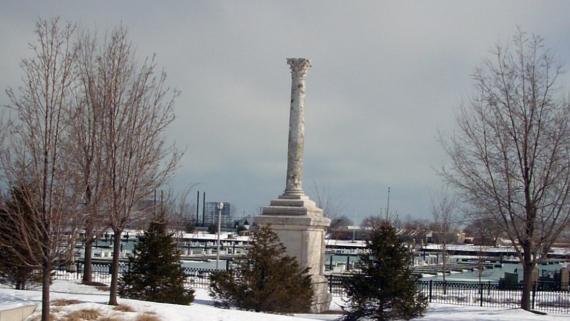 Today, the Balbo Monument is the most ancient outdoor artifact in Chicago. Its shaft, composed of compressed stone known as breccia, came from a Roman structure located on the shores of Ostia, Italy from the time of Julius Caesar. A gift of Benito Mussolini, the monument was dedicated on Italian Day in 1934 at Chicago’s second World’s Fair, known as A Century of Progress. Mussolini gave this column to the city to commemorate the flight of the Italian amphibious airplanes which had landed in Chicago in 1933 during the first year of the fair. This transatlantic flight—the first of its kind by the Italian air force—was so technically challenging that the seaplane crew trained together for over a year before the voyage. The Corinthian column was carefully dismantled, loaded in the 24 hydroplanes planes, transported, and reinstalled near the Italian Pavilion—a building shaped in the form of an airplane to commemorate the feat of General Balbo and his squadron.

The Italian Pavilion was only temporary; however, the monument has always remained in the same location near the harbor in Burnham Park. Today, some consider the monument controversial because of its ties to fascists Benito Mussolini and Italo Balbo. During the 1920s, Balbo attacked socialists and communists, becoming marshal of Italy’s air force under Mussolini. Despite these associations, many older Chicagoans have fond memories of witnessing the impressive arrival of the Italian airplanes more than seventy-five years ago.

Gallery:
Burnham Park: Balbo Monument
Date Posted: 7/20/2015 The Balbo Monument was installed in front of the Italian Pavilion at A Century of Progress,Chicago…
Advertisement