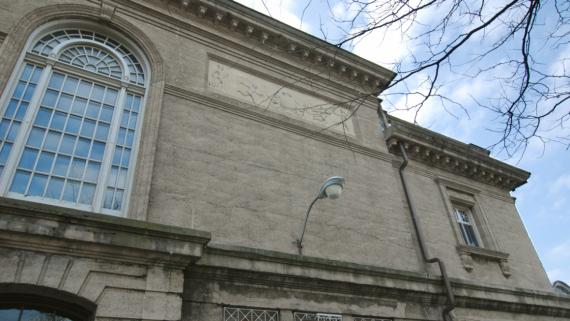 Calumet Park was conceived in 1903 as part of the South Park Commission’s revolutionary neighborhood park system. Due to slow development, however, the park was not completed until the 1930s. Working in the style and spirit of D. H. Burnham and Company, the designers of Chicago’s original field houses, South Park Commission architects finished plans for the Calumet Park field house in 1922. The design called for two bas-relief panels on the north facade, flanking the upper portion of the massive arched windows. Preliminary illustrations reveal that the panels were intended to depict adults, dressed in classical garb, bearing symbols of drama, art, and knowledge. In January 1926, the South Park Commission selected renowned sculptor Frederick C. Hibbard to construct the bas-reliefs.

Hibbard generally adhered to the designers’ vision, although he chose to portray the figures as cherubic youths, enlisting his daughter Josephine as his model. Each bas-relief features six children merrily cavorting. At the center of the east panel, a globe is supported by cresting waters. The child to the right holds a cog, representing industry; to the left, the youth bearing the sailboat signifies navigation. One of the dancing figures holds the dual masks of theater—comedy and tragedy. The boy gesturing toward them clutches a book close to his heart; behind him stands a tree of knowledge. Hibbard described the overall scene as “one of animation and joy.”

The west panel features a large urn, which depicts an interior scene of three dancing women. These women playfully echo the frolicking children, in addition to recalling dancers painted by Henri Matisse. To the right of the urn, a child plays with a toy in a quest for invention; to the left, the flying kite represents curiosity and Benjamin Franklin’s discovery of electricity. At the far left, the figure bearing a wheel suggests transportation. The boy on the far right holds a small replica of a classical sculpture. The architectural temple at his feet reinforces the motifs of knowledge and the arts.

Originally trained as an electrical engineer, Frederick C. Hibbard (1881–1950) moved to Chicago in 1901 to pursue his true passion: sculpture. He trained at the School of the Art Institute under the renowned sculptor Lorado Taft. Within a year, Hibbard became Taft’s assistant, and in 1904 he opened his own studio. Hibbard went on to have an extremely prolific and successful career, creating over seventy commissions nationwide, including a monument to Abraham and Mary Todd Lincoln, the first presidential sculpture to feature a depiction of the first lady. His major works in Chicago parks include the Eagle Fountains in Grant Park, the Greene Vardiman Black Memorial in Lincoln Park, the Garden Figure in the Lincoln Park Conservatory, and the David Wallach Fountain in Burnham Park, the last of which was a collaboration with his wife, Elizabeth Haseltine Hibbard (c. 1894–1950).