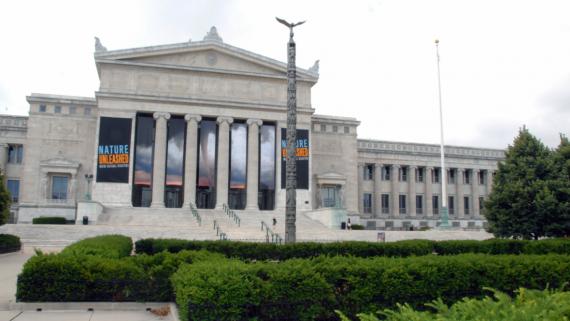 Located north of the Field Museum

The Women’s Board of the Field Museum of Natural History commissioned the Big Beaver Totem Pole in honor of a permanent exhibit about the Maritime Peoples of the Arctic and Northwest Coast which opened in 1982. Norman Tait, a member of the Nishga’a Band, Tsimshian Tribe of British Columbia, carved the totem pole. The son of a carver, Tait (b. 1941) is committed to retaining the tribal traditions of his people. When he began carving in 1970, he studied Nishga’a artifacts and because there were no living master carvers within the tribe, he trained under Haida carvers Freda Diesing and Gerry Marks. Tait is now teaching younger generations of his family to create totem poles.

Tait’s Chicago totem pole was his first permanent installation in the Americas. The fifty-five-foot-tall monument explains Tait’s family ancestry and the origin of the beaver as its clan symbol. It depicts a legend in which five brothers go on a beaver hunt. The youngest brother discovers the spiritual powers of beavers and helps two of them escape. The Field Museum sponsored a traditional Niscga’a tribal ceremony with costumes and dancing during the unveiling of the totem pole.