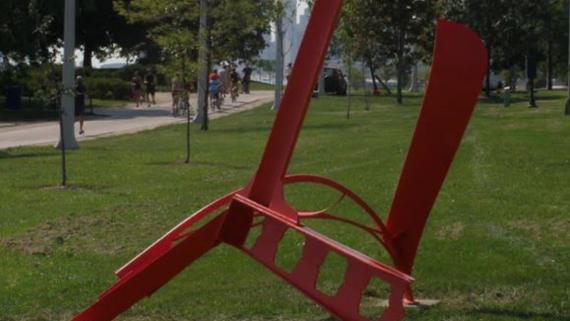 Artist's Statement: Birds of Fire was inspired by an album of instrumental music of the same title by jazz-fusion group the Mahavishnu Orchestra, which in turn was inspired by the poetry and teachings of the members’ guru, Sri Chinmoy.  The sculpture is an attempt to personify in plastic form the themes of transcendence and spiritual aspiration that are central to both of the other visions.

The construction process is essentially the same as that used in building the steel frame of a skyscraper, with oxygen/fuel gas cutting and electric arc welding as the two linchpins.

While the motive in creating the piece was to attempt to invoke (presumably solely) human emotions, the actual forms of the sculpture derive from observation of natural forms, and, in particular, the examination of traditional American Indian methods of depiction and transformation.

I have for a number of years used bird themes as springboards for the examination of emotional and philosophical issues, indeed, sometimes going so far as to have the bird representation serve as, effectively, a self-portrait.

This particular piece is well within the canon of freestanding modernist sculpture, in both a physical sense as well as thematic, which was pioneered by Alexander Calder among others, including a mentor of mine, Mark di Suvero, for whom I worked when I was a teenager. Two of Mark's huge sculptures are currently also on display as part of the Park District's Art in the Parks program, both between Lake Michigan and Lake Shore Drive, one about 600 South, and the other about 5300 South near Promontory Point in Hyde Park.

Other works of mine range from utilitarian benches to architectonic reliefs, and from fully abstract to stylized representation, often depending on the site context. For example, the city owns two benches of mine in Bronzeville, on Martin Luther King Jr Drive, one at 25th Street and one at 33rd Street. The neighborhood was in the 1920s and 30s a central point for jazz and blues music and many of the musicians also lived in the area. The two sculptures are dedicated to some of those people, with the southernmost dedicated to guitarist Hudson Whittaker, who recorded as "Tampa Red." The other is in honor of Louis Armstrong, jazz giant/trumpeter/ singer, and his wife and collaborator at the time that he lived and worked in the area, pianist and composer Lillian Hardin Armstrong.

Offering a broad palette of expression can permit audiences a similarly broad range of experiential modes, ranging from the purely visual to tactile and in some cases auditory. All of these experiences can enhance the perception of the universal through the experience of the particular.  In this way, art in the public can transform thinking about space, and about one’s relationship to it.