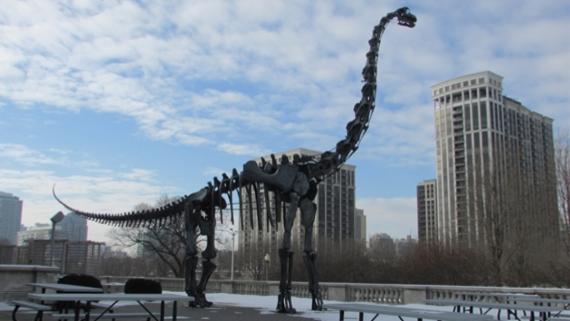 Located on the west terrace of the Field Museum

In 1999, the Field Museum created this all-weather replica of the Brachiosaurus dinosaur that stands on the terrace just west of the museum.  The replica was made from casts of a dinosaur discovered in 1900 by the Field Museum’s first paleontologist, Elmer Riggs.  According to the Field Museum, Riggs led his team to the Late Jurassic Morrison Formation in western Colorado, famous for “Brontosaurus” (now known as Apatosaurus), the largest dinosaur found up until then.  They found a very large bone eroding out of a hill near the little town of Grand Junction.  As the paleontologists continued digging, they discovered about 20% of a huge dinosaur. The following winter, scientific studies revealed that these were the bones of a brand new dinosaur, bigger than Brontosaurus.  Riggs named his new behemoth Brachiosaurus altithorax (deep-chested arm-reptile).

In 1993, the Field Museum unveiled a mounted skeleton of the Brachiosaurus in Stanley Field Hall. This skeleton consists of casts of Riggs' Brachiosaurus, and of life-sized model bones based on the closely related Giraffatitan from Tanzania. In 1997 the skeleton was moved out to the United Airlines Terminal at O’Hare.  The all-weather replica of the skeleton was put on display on the NW terrace in 1999.  The replica can be seen from Lake Shore Drive, and it has become iconic for donning the jersey of various Chicago teams during sports seasons.