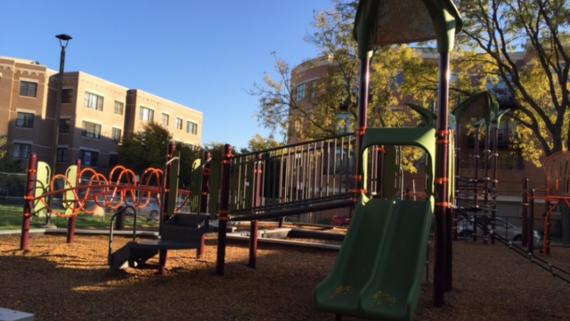 In 1908, the Buena Avenue Citizens Association gave the City of Chicago a small elliptical park with trees and lawn, a large ornamental fountain, and two drinking fountains. Real estate speculator James B. Waller established the area as a suburb in 1860, building his own stately home and naming it Buena, possibly in honor of a borough in his native New Jersey. The city annexed the Buena Park neighborhood in 1889, and by the turn of the century, it was a fashionable district of tree-lined streets and fine homes and apartment buildings. When the citizens association gave the park to the City, they stipulated that it would always be known as Buena Circle Park, would forever be used as a public park, and would always remain free of any buildings whatsoever. In 1957, the City transferred Buena Circle Park to the Chicago Park District pursuant to the Chicago Park and City Exchange of Functions Act. Playground equipment was added in the early 1960s, and a few years later, the Park District briefly considered constructing a swimming pool in the park. In 1991, the park received major improvements including a new accessible playlot, lighting, and plantings as part of an initiative to transform nearby vacant land into the new Challenger Park.

Kerfuffle: The Conductors at Buena Circle