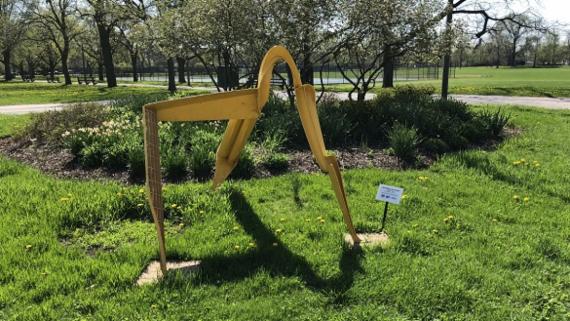 Artist's Statement: My name is Ted Sitting Crow Garner, and I’ve been making sculpture in Chicago since 1974, and my own sculptures since 1976.  The Sitting Crow part, or in Lakota Kangi Yotake, has been a name in my family since at least the early 1800s, when it was signed to the first treaty between the Northern Lakota or “Saones” and the United States in 1825.

My great-great grandfather of the same name signed the 1868 Fort Laramie Treaty, and you may easily find a photograph of him if you enter our band name “sihasapa” in a Wikipedia search.  By the way, the photograph was taken by Alexander Gardner, the same person who had taken the last photograph of a living Abraham Lincoln.

This sculpture is entitled Bumble and was created in 1978.  The piece is intended to portray the interaction of a bee and a flower.  I was invited to participate in a group exhibition at the Hyde Park Art Center that was to be entitled “The Flower Show,” along with some 50 or so artists.

I didn’t realize that the gallery space was only a small store front, and so after I’d borrowed a truck to take the piece down there, I realized that I had created a “bull in a china shop” situation.  I did get some compliments on the piece at the opening, but more out of politeness than honesty, I believe.  I heard more complaints about people having tripped over it.