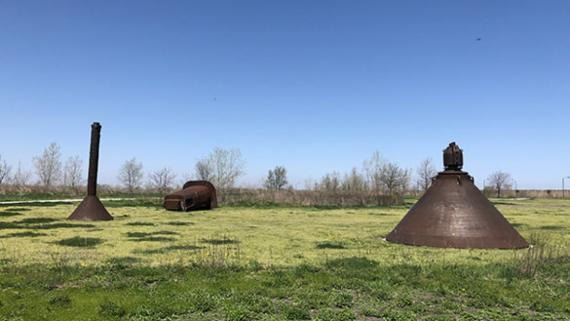 These large artifacts and the nearby concrete ore walls are among the last remaining physical reminders that the Calumet region of Chicago was once home to four integrated steelworks. At their peak, the steelworks, including this South Works site, employed over 30,000 workers. From the site you can see operating blast furnaces at Indiana Harbor in the foreground, Gary in the middle distance, and on a clear day, Burns Harbor in the far distance amidst the Indiana Dunes.

The largest artifact, a blast furnace bell, weighs twenty-six tons and came from the former Acme Steel Blast
Furnace located at 107th and Burley. Along with the fourteen ton small bell, it provided a method of evenly distributing the iron, coke, and limestone into the furnace from above, and then sealing it off without loss of gases or heat. The small bell would be raised and lowered to either close or open the top of the furnace, and also that the large bell could be swiveled to distribute materials evenly. Blast furnaces produced the pig iron needed to make steel. The third artifact, an ingot mould pattern, was used at the former Bethlehem Steel facility in Burns Harbor, Indiana.

The bells were donated to the Calumet Heritage Partnership by the Beemsterboer Family. The small bell and the ingot mould pattern arrived at the Pullman State Historic Site in April of 2007 and the large bell followed in October of 2008. A number of volunteers and machinery movers donated time, effort, and resources to the project. Two cranes were required to lift the large bell off the twenty-wheeled lowboy trailer.