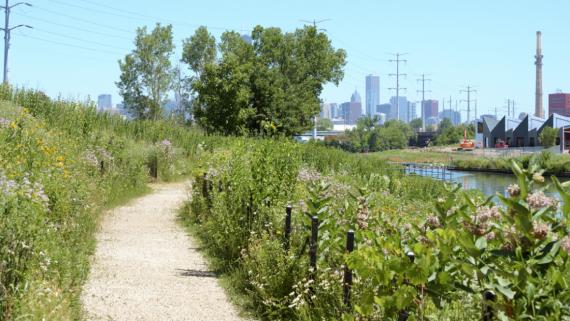 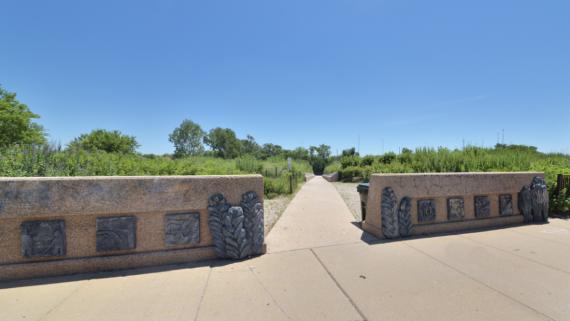 Ceramic friezes tell the story of the canal 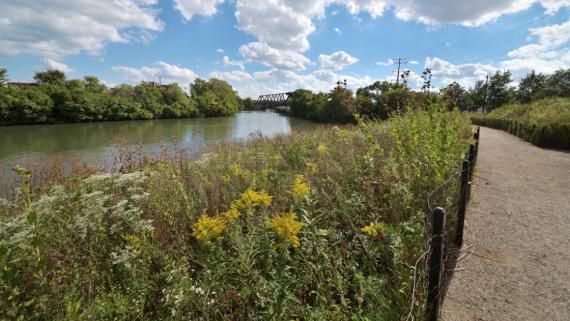 Beautiful views of the river
Location:

Canal Origins Park commemorates the creation of the Illinois & Michigan Canal as it connected the Great Lakes with the Mississippi River drainage basin. The 2.99 acre park includes historical interpretation signage and sculpture depicting pre-settlement conditions and life on the canal after it was completed in 1848.

The park also offers a “canal cut,” which provides patrons with views of what it would have been like to float down the canal on a canal boat. Other amenities in the park include native plantings, a fishing station and walkways. Because of the site's historic significance, Canal Origins Park was designated as a Chicago Landmark in 1996.

Canal Origins Park represents the beginning point of the historic Illinois and Michigan (I & M) Canal, a 96-mile long manmade waterway that was built to provide a link between Lake Michigan and the Mississippi River.

As explained by authors Blanche Shroerer, Grant Peterson and S. Sydney Bradford, "Just as the Erie Canal secured New York City's position as the most important shipping center on the East Coast, the Illinois and Michigan Canal guaranteed Chicago's place as the key transporation center in the Middle West."

The United States Congress made its initial land grant to Illinois in 1822, and ground was finally broken for its construction in 1836. The canal opened in 1848, and its impact on Chicago's growth was soon apparent. The city had only 4470 residents in 1840, when the canal was being built. In 1850, the city had a population of nearly 30,000 and four years later it had more than doubled to 74,500 residents.

The I & M Canal reached its peak in 1882 when hundreds of boats used the waterway to transport over a million tons of cargo. Although the I & M Canal was rarely used to transport cargo after the Chicago Ship and Sanitary Canal opened in 1900, it continued to be used by recreational and excursion boats.