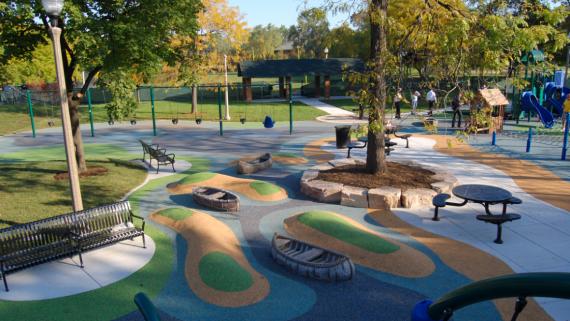 Chicago artist Phil Schuster created these interactive canoe sculptures for the Portage Park playground in 2011. The whimsical boats evoke the early history of Portage Park, which was named for several nearby routes used by Native Americans and fur traders, who lifted their canoes to transport them between the Des Plaines and Chicago Rivers. Set into the rubberized playground surface, Schuster’s canoes provide the contemporary audience with a glimpse of history. Children can climb inside the boats and pretend to paddle away, just as Native Americans did over one hundred years ago.

Schuster created the canoes in “a variation of styles that would be kid friendly.” Some of the boats have pronounced curvatures that culminate in peaks at either end of the vessel. Other boats display flatter and squatter forms. The sculptures are crafted out of fiberglass, a durable material that can withstand both tough Chicago weather and the wear and tear caused by children playing on them. The boats are painted a range of earthy colors, including browns, taupes, and golds. Exterior decoration replicates natural elements such as wood, reeds, and other organic materials that would have been used to construct canoes in the nineteenth and early twentieth centuries.

Schuster has produced other fanciful pieces that enliven the playgrounds at Julia de Burgos and Skinner Parks. He also created miniature power boats at Roscoe Playground in Lincoln Park. Other examples of his work are relief sculptures at the Garfield Park Conservatory, Lake Shore Park, and the underpass leading into Jane Addams Memorial Park.