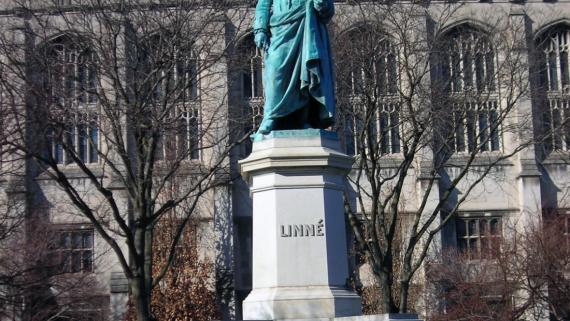 In 1890, members of Chicago’s Swedish community offered to donate a sculpture of their countryman, naturalist and botanist Carl von Linné (1707–1778) for installation in Lincoln Park. The group raised more than $18,000 to make a copy of a famous monument of Linné by Swedish sculptor Frithiof Kjellberg (1836–1885) located in the Humlegarden in Stockholm. The replica sculpture was unveiled in Lincoln Park on May 23, 1891—the anniversary of Linné’s birth.

Kjellberg depicted Linné in a long cape which drapes under one arm and across his chest. The figure holds the edge of the cape in his other hand along with a flower. A book is tucked under that arm. Below him, at the corners of its limestone base, four pedestals originally supported smaller sculptures. These allegorical female figures symbolized philosophy, zoology, medicine, and geology.

In its original Lincoln Park location, the Carl von Linné Monument was surrounded by green space. In the 1940s, however, when Fullerton Avenue was extended, the monument stood right at the edge of the new roadway. For years, Chicago’s Swedish community asked to relocate the Linné Monument to provide it with a more commodious space for large celebrations and festivals. In the 1970s, George Beadle, president emeritus of the University of Chicago, encouraged the Central Swedish Committee to promote the idea of moving the sculpture to the Midway Plaisance. They gained strong political support and the Chicago Park District approved the proposal. The monument was moved in time for a visit by King Carl XVI Gustaf of Sweden to the University of Chicago in 1976. The relocation received extensive media coverage and proved to be very controversial. The Swedish groups planned to repair the allegorical bronzes at a later date, and the smaller figures were put into storage. This effort never materialized and the figures have long since gone missing.

In recent years, the Chicago Park District and University of Chicago worked together to improve the Midway Plaisance near the monument. Changes include a new Readers Garden designed by landscape architects Craig Bergman and Site Design Group.