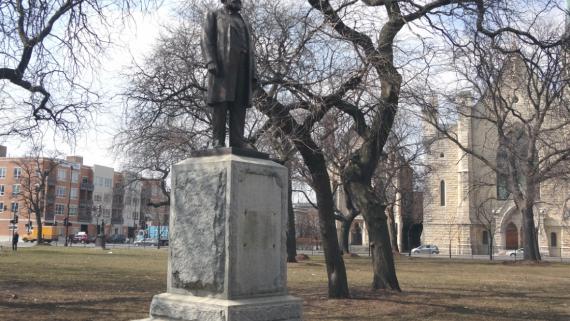 This bronze sculpture honors Carter H. Harrison, Sr. (1825–1893), a famous political figure who lived in a mansion on S. Ashland Avenue near Union Park. A two term member of the United States House of Representatives, Harrison served as Chicago’s mayor from 1879 to 1887. Shorly after his election to a fifth term as mayor in 1893, Harrison was assassinated on October 28 of that year, three days before the conclusion of the World’s Columbian Exposition.

Viewed as the “people’s mayor,” Harrison Sr. was well loved by Chicagoans, and local residents deeply mourned his death. To honor his memory, a Carter H. Harrison Memorial Association formed in 1897 and began raising money for the monument. For each one-dollar contribution, donors received a certificate and a medal certifying their participation in the effort. A large number of local citizens contributed to his memorial statue over a period of several years.

Historically, there was a bronze plaque mounted on the front of the granite pedestal. The plaque included an excerpt from a speech that Harrison gave at the World’s Fair just prior to his assassination: “Genius is but audacity, and the audacity of Chicago has chosen a star. It has looked upward to it and knows nothing that it fears to attempt and thus far has found nothing that it cannot accomplish.” Sadly, the bronze plaque has been missing for many years along with a pair of ornamental lights that once flanked the sculpture.

Frederick C. Hibbard produced a substantial collection of artworks in the Chicago parks. These include Greene Vardiman Black and the Garden Figure in Lincoln Park; Eagle Fountains in Grant Park; and memorial drinking fountains in Ogden and Trumbull parks. His wife Elisabeth Haseltine Hibbard was also an artist. Together the couple created the David Wallach Fountain in Burnham Park.