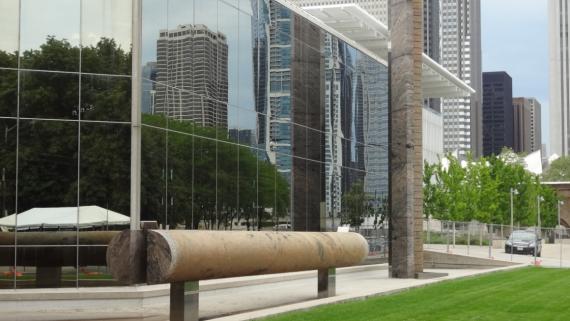 The B.F. Ferguson Fund commissioned this fountain to commemorate the bicentennial of American independence. The monumental abstract artwork extends along the west façade of the Art Institute of Chicago along Columbus Drive. It was installed in 1976 during the construction of architect Walter Netsch’s Columbus Drive addition to the Art Institute of Chicago.

Famed Japanese-American artist Isamu Noguchi sculpted the monument. The son of a Japanese poet and an American writer, Noguchi (1904–1988) was born in Los Angeles, but spent most of his childhood in Japan. He was sent back to the United States to attend high school and later trained under the renowned sculptor Gutzon Borglum. (The sculptor of Mount Rushmore, Borglum produced two pieces in Chicago-- Lincoln Park's Sheridan and Altgeld monuments.) After working with Borglum, Noguchi assisted acclaimed sculptor Constantin Brancus in Paris. Naguchi went on to open his own studio in New York, and also spent substantial time in Japan. He received critical attention and many honors including the National Medal of the Arts in 1987.

This sculptural fountain is composed of two 40-foot-long pieces of 300-year-old rainbow granite from Minnesota. Water streams up the back of a vertical element and flows down the front through its grooves. The horizontal expanse has a constant cascading waterfall representing an underground spring. Noguchi referenced this natural metaphor, stating, “Every bit of nature that we can bring back into our cities is good…But we can bring only equivalents. So part of my work is like the capillary action of a tree, with water rising up inside. As it overflows, adhering to the serrated grey and pick stone, there is the suggestion of a complete natural cycle.”

Gallery:
Grant Park: In Celebration of the 200th Anniversary of the Founding of the Republic
Date Posted: 7/23/2015 Many of Noguchi's fountains have utilized innovative technologies and materials. But, for this…
Advertisement