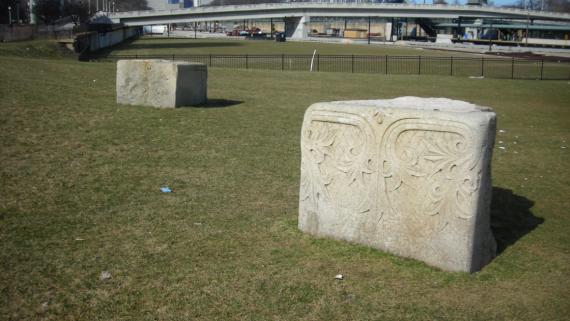 Composed of Milford granite, this pair of architectural fragments is almost entirely all that remains of Chicago’s famous Central Station, which stood at the southwest edge of Grant Park from 1893 until its demolition in the mid-1970s. Bradford Lee Gilbert (1853–1911), who served as the consulting architect to more than a dozen railroad companies, designed the massive Romanesque style building. It served as a bustling station for the Illinois Central Railroad Company. These ornate granite blocks were part of an enormous arch through which passengers passed when first arriving in Chicago.

The City of Chicago's Cultural Historian Tim Samuelson considers these fragments a powerful symbol because the station served as a “virtual Ellis Island of the rails for hundreds of thousands of African-American southerners who escaped the boot of Jim Crow between World War I and 1960.” Samuelson explains that for many African-Americans who arrived in Chicago during the Great Migration, “catching sight of Central Station” was similar to the first glimpse of Lady Liberty” the European immigrants had when landing by boat in New York Harbor.

When Central Station was razed in 1974, a railroad employee saved the two granite fragments and had them moved to an area of railroad right-of-way, at a safe distance from the demolition site. They remained there for decades until the City of Chicago and Chicago Park District worked together to incorporate them into landscape improvements that were made to the southwest end of Grant Park in 2004.