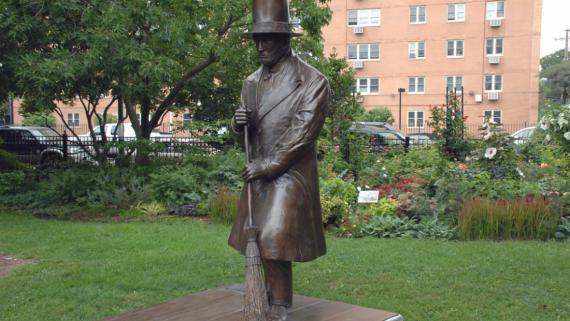 Wicker Park was named in honor of Charles Gustavus Wicker (1820–1889), an early Chicago settler, alderman, state legislator, businessman, and real estate speculator who helped develop the surrounding neighborhood. His great granddaughter, artist Nancy Deborah Wicker-Eilan created this bronze sculpture of her ancestor. In 1998, she received approval from Chicago Park District Board of Commissioners to sculpt and donate the Charles Gustave Wicker sculpture for installation in the park. Wicker-Eilan raised funds for the artwork and its maintenance, including grants from State of Illinois and the City of Chicago and many individual donations. The artwork was completed several years later.

To involve the students of nearby Pritzker School, Wicker-Eilan developed an educational component of the project. She had the elementary school students take field trips to her studio and the foundry. They also conducted research on the neighborhood and created a multimedia presentation based on what they learned.

Dedicated on September 21, 2006, the bronze figurative sculpture is approximately nine-feet-tall, including the base. Charles Gustavus Wicker is depicted sweeping the floor because when he served as a state legislator, a friend saw him sweeping a Chicago polling place and asked why he was “doing that?” Wicker, who also served as a railroad president at the time, replied: “Because it was dirty.” The figure of Wicker stands on a bronze base that represents the unkempt floor.