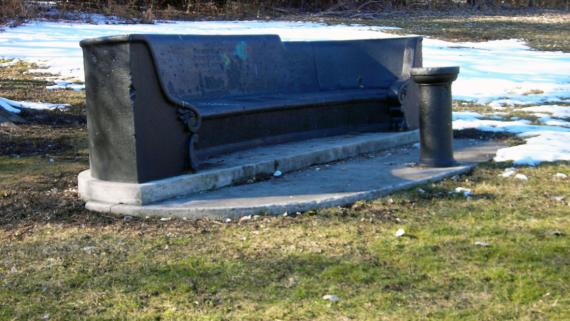 The Cheney-Goode Memorial is one of Chicago’s few early monuments dedicated to women who played a significant role in the city’s history. It honors two accomplished women who lived on the city’s South Side, Flora S. Cheney and Katherine H. Goode. A large number of donors contributed to this memorial limestone bench and sundial.

Flora Sylvester Cheney (1872–1929) was a political activist, reformer, and legislator. She served as campaign manager for her husband Henry W. Cheney’s first successful run for alderman. Cheney helped secure voting rights for women and became president of the Illinois League of Women Voters as well as the first president of the Cook County Council of Leagues of Women Voters. Just as she did for her husband in his campaign, Cheney helped longtime friend Katherine Hancock Goode (1872–1928) in a successful bid to represent the fifth senatorial district in the Illinois State Legislature. After Goode’s death, Cheney was elected in November 1928 to take over her friend’s seat in the Illinois Legislature. Cheney died in office the following year.

In honor to these pioneering women, the Cheney-Goode Memorial was dedicated in 1932. Its original inscription described the two as “leaders who devoted their lives to the civic betterment of their neighborhood, city and state.” Unfortunately, the bench and sundial were vandalized almost immediately after the dedication. Problems with graffiti have continued over the years. Due to the persistence of graffiti, the entire stone structure was painted dark gray several years ago.